China’s military buildup has been well-documented in recent years, but now the Pentagon is warning that Beijing could have 1,000 nuclear warheads by 2030. This would be a major increase from today’s total of 250 warheads. The report also says China will be able to reach the U.S.’s long-range missile defense and penetrate its air defenses with new missiles and aircraft under development.

Beijing will almost certainly be able to match the U.S.’s own stockpile of 2,000 warheads in the same time period, reports Reuters.

This comes after last week’s story on China’s upgrade of its DF-5 silo-based missiles with multiple warheads. This is part of an effort to maintain its nuclear deterrent while limiting the number of missiles and warheads in its arsenal.

The U.S., meanwhile, is engaged in a massive modernization program to keep its edge. But Beijing is also catching up fast: according to the Pentagon report, China will be able to deploy far more advanced submarines and ballistic missiles by 2020 than it can today, reports the AP. 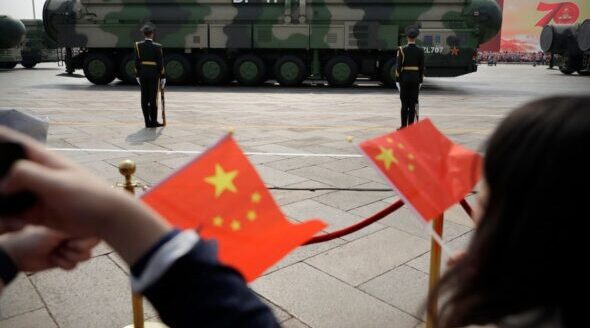 Broadly, the U.S.’s nuclear capability is unrivaled, with 10 Ohio-class ballistic missile submarines, 14 Trident strategic submarines , and scores of nuclear bombers and Intercontinental Ballistic Missiles (ICBMs). But the Pentagon said most of its systems were aging. “Nuclear modernization programs are expensive — very expensive,” Defense Secretary Robert Gates said on Monday after releasing the report.

The U.S.’s nuclear stockpile has declined from a peak of 31,255 warheads in 1966 to 5,113 as of September 2009, according to a 2010 report by Steven Aftergood of the Federation of American Scientists . While it’s difficult to estimate China’s current arsenal, the Pentagon thinks it has about 250 warheads. The Stockholm International Peace Research Institute, an arms-control think tank, estimated in a 2009 report that China had only 20 nuclear-equipped missiles.

China’s ongoing modernization should narrow the gap with the U.S., but Washington will likely retain significant advantages in some areas — particularly submarine technology and bombers. China is not believed to have any nuclear-powered submarines — a huge technological advance that allows for underwater, and therefore undetectable, operations. And the Pentagon thinks China has only about 20 bombers capable of carrying nuclear weapons (most U.S. aircraft are dual-capable).

While most of the report focuses on new long-range ballistic and cruise missiles, it contains some troubling information about Chinese bomber forces. Beijing has “continued to modernize its strategic bomber force, enhancing both the quality and the quantity of its fleet, it says.

It’s believed China is working on a ballistic missile that could target satellites in space, giving it the ability to knock out crucial U.S. communication and early-warning systems, reports Reuters .

The Pentagon report estimates China will be able to deploy up to 86 ICBMs by 2020, including up to 50 new road-mobile missiles under development.