A bull that escaped a Long Island farm was captured after two months on the loose! The bull, which is now named “Hank,” had been living in the woods of Suffolk County for some time. Hank was finally caught by local volunteers and taken to an animal sanctuary. A photo of Hank being caught is below.

Hank was captured in the woods behind Middle Country Road, according to Newsday. One volunteer, Mattia Desrosiers, said, “We finally got him like we wanted to get him,” and that he couldn’t be happier. Another volunteer, Valerie Mizzone states that she wasn’t able to do much on the day of Hank’s capture, but she was happy all the same.

Hank was first reported missing on February 13th, after he escaped his farm in Center Moriches. He had been spotted on several occasions since then and animal control officers were finally able to catch him this past Thursday (July 25th). He was taken to the Skylands Animal Sanctuary and Rescue, which is located in Wantage, New Jersey.

It was reported that Hank had been “living like Tarzan” since he escaped his farm. Groups of local Suffolk residents used their time off from work to search for him, and they finally found him on Thursday afternoon. 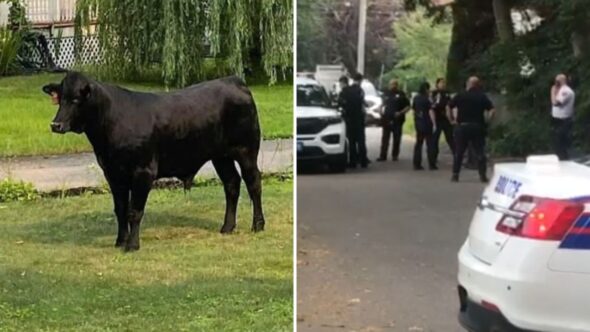 Hank’s owner, Wally Stevens, said that he was “ecstatic” to hear about the bull’s capture. He stated that Hank is getting along well with other cows at Skylands and it seems like things are looking up for him! The news report on Hank can be seen below.

Since February, there have been many sightings of Hank in the area. One time, Hank was found just walking on the side of the road near Center Moriches.

Two local residents reported seeing him on the day he escaped. They stated that they had seen a brown bull by the woods and another at a bait shop on Montauk Highway. These two sightings are what initially led to Hank being reported.

On the same day, another resident of Center Moriches saw Hank in his backyard eating grass. She stated that he seemed pretty calm, but she was still very nervous. He also went missing near Lake Grove on March 2nd, when a woman spotted him in her yard about 5 AM. However, he ran back into the woods before anyone could get a good look at him. It wasn’t until January that Hank was finally found.

On February 13th, he escaped his farm in Center Moriches. He had been seen on several occasions since then and even today after being caught, he is doing well! Let us know in the comments below.