Democrats have reportedly clashed with junta forces in Myanmar. According to international media, at least 90 members of the army have  killed  resistance fighters in the last five days of clashes.

Four fighters were killed in the clash.

The bomber struck very quickly after noon in front of a U.S. military base near the village of Mainmoor in the Sagaing region.

This led to massive casualties.

Elsewhere, the PGC claimed that 20 soldiers had  killed in an attack on a military convoy.

These attacks were carried out using mines. 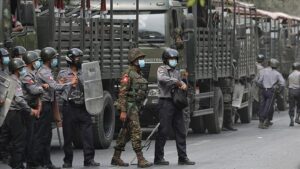 Earlier, on the morning of June 15, seven soldiers were killed in a PDF ambush on the Maniwa-Ayrdau highway.

“We are fighting for our lives, against military rule and for our people,” said PDF fighter Ko Daung Haman.

Millions of civilians took to the streets to protest. The junta government resisted them with strong hands.

Thousands of people lost their lives in the ongoing movement.

Earlier, in a three-day operation, Myanmar’s junta burned down hundreds of homes in the northern part of the country. Local media and villagers  demanded this.