Texas now has in place the most restrictive abortion law in the nation: one that bans abortions, with no exception for rape or incest, as early as the sixth week in a pregnancy. The law also empowers citizens to sue those who perform an abortion or anyone who “aids and abets” the procedure. Those who sue successfully can receive $10,000. The law was deliberately written to make constitutional challenges more difficult. Republicans in other states are taking note.

In a 5-to-4 vote, the Supreme Court allowed the law to take effect, virtually shutting down access to legal abortions in the state; the impact of which will fall more heavily on low-income women and women of color. When the abortion bill passed the Texas House and Senate, not a single Republican opposed it. One House Democrat and one Senate Democrat joined the GOP majorities.

The abortion law went into effect during a week in which the Texas legislature passed a law restricting voting rights in the state. The bill curbs some of the practices that were implemented during the 2020 election, such as 24-hour voting and use of drive-through polls. It came after a protracted battle that included two special sessions and a lengthy walkout by state House Democrats designed to deny Republicans a quorum

While adding an hour a day for early voting, the law includes tighter rules for those who assist others in filling out their ballots, gives partisan poll watchers more freedom to oversee the ballot-counting process and threatens poll workers with penalties if they step out of line. It also adds restrictions on the use of mail ballots. The restrictions on voting are likely to affect voters of color more than White voters and appears to be aimed principally at Houston and its heavily Black and Latino — and pro-Democrat — population.

On Wednesday, a new law took effect in Texas that allows any gun owner to carry a handgun in public without a permit or training. Advocates call it the “constitutional carry” law. “Texas will always be the leader in defending the Second Amendment, which is why we built a barrier around gun rights this session,” Gov. Greg Abbott said when he signed the bill in June. It was one of seven gun measures he signed that day. In this case, Texas was joining many other states that have similar laws. 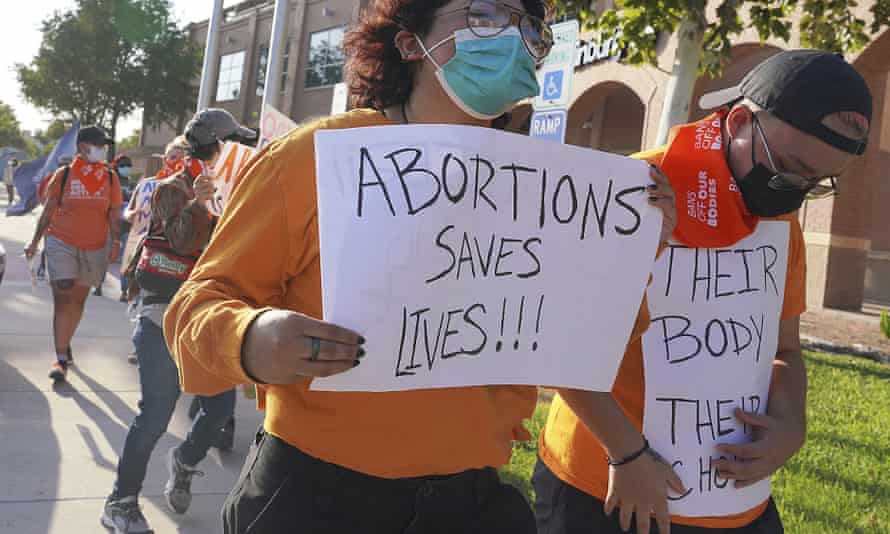 Fueled by the delta variant, the coronavirus has surged in Texas during recent months, as it has in a number of Southern states. Abbott issued an executive order banning local mask and vaccine mandates, one of many orders during the pandemic designed to restrict local efforts that could slow the spread of the virus. Officials in some major Texas cities have sued the state and, meanwhile, have defied the no-mask-mandate order.

Abbott opposes any vaccine mandates in a state where the percentage of eligible people who have received at least one shot is below 60 percent and where only about half are fully vaccinated. The rate of vaccinations in Texas fell in the most recent week, according to The Post’s vaccine tracker.

Trump won the state in 2020, though his victory margin was smaller than in 2016 and much smaller than previous GOP nominees had done. Democratic hopes for gains in the state House last November evaporated. With a grip on all statewide offices and both chambers of the legislature, Republicans have had their way this year.

But as elsewhere around the country, the Republican Party in Texas is not what it used to be. The philosophy of Texas Republicans like George W. Bush and George H.W. Bush has given way to a far more extreme version of conservatism — and an effort to tailor policies and rhetoric to please and accommodate the Trump wing of the party.

Abbott, who is running for reelection in 2022, governs in an environment in which he must guard his right flank, as he is not the most conservative official in the state’s hierarchy. Some Texans believe he might have his eye on a presidential campaign in 2024, depending on whether Trump runs again, though an Abbott bid could collide with another Texas Republican’s presidential ambitions: those of Sen. Ted Cruz, should he try again.

Abbott and Florida Gov. Ron DeSantis, as governors of the two most-populous GOP-led states in the country, are competing to showcase their conservative governing bona fides. They have become symbols of resistance to federal recommendations from the Centers for Disease Control and Prevention in the coronavirus battle.

The legislative party in Texas is dominated by White politicians, specifically White men. The Texas Tribune reported at the start of the legislative session in January that all but five of the 100 Republicans in the state House and Senate were White, while 13 of the 100 were women. In a state whose population is about 40 percent Hispanic, just two of the Republicans in the state House were Latino, two Asian and one is Black.

Texas is an example of the Balkanization of the country, as red and blue states push farther and farther apart in the policies they embrace and enact. No state of note, however, has gone as far in one direction as Texas. In that way it is a model for those who cheer those policies. Whether it becomes a political-object lesson is now the question.