Afghan women who live overseas pose in colourful clothes and full makeup, despite the personal security risks. They want to show that they are not afraid of living in a new country and can be just as carefree as any other woman. Once they are back in Afghanistan, however, all that changes.

A woman who is not veiled does not feel safe on the street, says one of them during an interview with Stephanie Sinclair , who lives in New York and works as a photojournalist. Her portraits of these women form part of her project called ” Veiled Rebellion “, which will be on display for the first time at a photo festival in Amsterdam.

“They wanted to show how free they feel outside Afghanistan and how sad it is that they have to wear the veil when they return home,” says Annemarie van de Mond of Foto Festival Amsterdam, which presents the work next week. “It shows that women actually want to decide for themselves, which is what the Taliban denies them.”

Afghanistan’s constitution states that men and women are equal. But in reality it is almost impossible to find a job or go to university if you are not veiled . Van de Mond says the project shows how freedom of choice over one’s own appearance can be an important means of political protest.

The portraits were taken over a period of four years in a variety of countries: Canada, Germany, Sweden and the US. Most women Sinclair met there had fled Afghanistan as refugees. “They have experienced both the burqa and the freedom to wear whatever they want outside Afghanistan.”

“Their appearance may vary but what remains the same is that they refuse to accept the burqa; they don’t want to give up their freedom of expression. They say the burqa represents ignorance.” 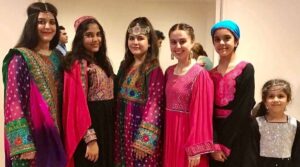 The women she met were often given financial support by UN organizations, which helped them start a new life abroad. “They are not all well-off but prefer to live modestly in order to have enough money to go back and help their families.”

Her project is not only about the desire of Afghan women to be free. It also reveals a love of beauty and colour that, despite all the risks involved, they refuse to give up.

“They have been forced to wear a burqa for so long that they want to show that they still have a feminine side,” says Sinclair. “So they show off their colourful clothes and make-up, despite the limited freedom they enjoy in Afghanistan.”

The Afghan woman’s desire to wear colourful clothes and make-up clearly contradicts the Taliban’s ideas of morality. But it does not mean that this desire is new or only true for refugees living abroad, nor that wearing colourful clothing is a sign of freedom. This desire has always existed, even when the Taliban was in power.

Every Afghan woman wants to be beautiful, says Mercy Corps , which provides assistance to women in Afghanistan . ” The urge to look good is universal, regardless of gender or background.”

The international charity believes that focusing on beauty can help its efforts to improve the lives of Afghan women: “There is a lot that can be done in terms of education and income generation based on what we already know about local demand for beauty treatments, such as facial scrubs, hair removal and henna .”