Manchester United and Arsenal are entering the field on Super Sunday in the English Premier League. The clash between these two teams is one of the biggest rivalries in the Premier League. Brazilian winger Anthony, who has just joined the Red Devil camp from Ajax, is going to make his debut in such a high-voltage match. However, Cristiano Ronaldo has to watch this match sitting on the bench. Casemiro is also on the bench.

After joining Manchester United, Anthony doesn’t have to wait long for his debut. The star, who has played for Ajax for the past two seasons, will make his debut against Arsenal on Sunday (September 4). Meanwhile, Portuguese superstar Cristiano Ronaldo has become a part of United’s attack, which has won three consecutive matches in the league. The five-time Ballon d’Or winner has made the starting eleven in just one match this season. The Red Devils were crushed 4-0 against Brentford that day.

The 37-year-old star made a desperate attempt to leave Manchester United at the start of the season. But due to his high salary and other issues, no club showed interest in him. Ronaldo did not join the club in the pre-season training at that time to change the team. 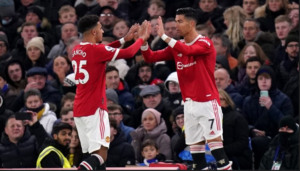 Coach Erik ten Hag is relying on an attacking formation consisting of Jadon Sancho, Marcus Rashford and Bruno Fernandes. They have won three consecutive matches by relying on this trio.

Ten Haag cites Ronaldo’s lack of pre-season training as the reason for not keeping him in the starting XI. According to him, the Portuguese star should be shown affection and love as well as discipline.

Manchester United’s Dutch coach has made it clear that he will take on the role of strict headmaster if needed. He said, ‘I will be his friend, sometimes a teacher, depending on the situation. Everyone knows he wasn’t in pre-season and it’s not right to miss pre-season.’