The dream of winning the Copa America is already in the dust. The competition’s third-place match was nonetheless crucial for Argentina.

Albiceleste would have  guaranteed to play in the World Cup if they won this match against Paraguay. In that match or not, the blue and white were behind until 78 minutes! However,

in the last 13 minutes, the team blew away all fears by scoring 3 goals. After defeating Paraguay 3-1, Argentina women’s team qualified for the World Cup.

The team faces Paraguay this Saturday morning at the Estadio Centenario in Colombia. Possession of the ball, shots on goal, Argentina was ahead in all aspects.

However, the team ended the first half behind. In the 39th minute, midfielder Ramina Nunez got the ball into their own net. 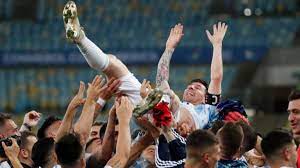 After falling behind, Argentina tried hard to come back in the second half. However, all efforts of the team have failed until the 78th minute of the match. Albiceleste’s fear was also increasing.

However, after Yamila Rodriguez’s goal in the 78th minute, the scenario changed. Argentina return to parity. Then Florencia Bonsegundo scored in the last minute of the scheduled time. The Akashi-Sadara lead by 2-1.

In the next minute, Argentina took the match out of Paraguay’s grasp. Yamila got the second goal. After winning 3-1, Argentina secured third place and also played in the World Cup. And Paraguay finished the tournament at number 4.

Earlier, the team’s dream of winning the Copa America remained elusive as a result of a 1-0 loss to Colombia in the semi-finals.

In the other semi-final, Argentina’s arch-rival Brazil beat Paraguay 2-0. Seleção reached the final stage of fulfilling their dream of 8th title.🔱