The death toll from a devastating landslide caused by heavy rains in Manipur, India, has risen to 34. At least 26 people are still missing.

However, rescue work hampered by rain. Meanwhile, the flood situation in Assam has not changed much.

The death toll from a devastating landslide caused by torrential rains in Manipur, India, on Thursday (June 30th) has risen,

with bodies found every day.

Many are still missing. Most of the casualties were army personnel. The Indian Army,

Assam Rifles, Territorial Army and Central Disaster Force are continuing their efforts to rescue those trapped under the rubble.

However, rescue work hampered due to rain. 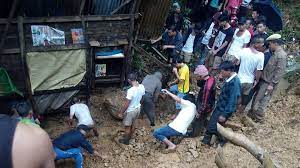 jawans from her state had died in the Manipur accident.He expressed deep sympathy to the families of the victims.

Meanwhile, the flood situation in Assam, another state in India, has not improved much.

Many people are still suffering in the flood waters.

On June 30, a catastrophic landslide occurred in Manipur, India. The death toll in the incident has been rising.

Bodies  found every day. Many are still missing. Most of the casualties were army personnel.

3 million people in the state are still living in waterlogged days.

Many people are spending the day in boats as their houses  washed away.

The worst situation in Assam is with the residents of Silchar.

There is no sign of water coming down. Flood victims complain of food and clean water crisis.🔱