Australia were ruthless in their pursuit of a semi-final berth at the T20 World Cup, thrashing Bangladesh by 47 runs to finish top of Group A. After winning the toss and electing to bat first, Aaron Finch’s side made light work of its modest target with Steven Smith smashing an unbeaten 81 from 54 balls. In reply, Bangladesh never threatened Australia’s total as they slumped to 114 all out with Glenn Maxwell taking 3 for 26. The result extends Australia’s unbeaten run against Bangladesh to five games and means the side will now face India in the semi-finals.

It was always going to be an uphill task for Bangladesh, restricted to just 66 runs in the final 10 overs thanks to some tight bowling. Aaron Finch (40) and Usman Khawaja (35) laid the platform with a solid opening stand of 69 before David Warner chipped in with 23. Captain Michael Clarke made 18 off 37 deliveries, but his dismissal in the 16th over precipitated a mini-collapse as Australia slipped from 106 for 2 to 111 for 5.

Australia then lost its last five wickets for just 32 runs and it required Smith’s whirlwind innings and some late hitting from Mitchell Johnson (18 not out) to get Australia over the line. For Bangladesh, Elias Sunny was the pick of the bowlers, taking 3 for 23, while Mahmudullah and Shafiul Islam chipped in with two wickets apiece. 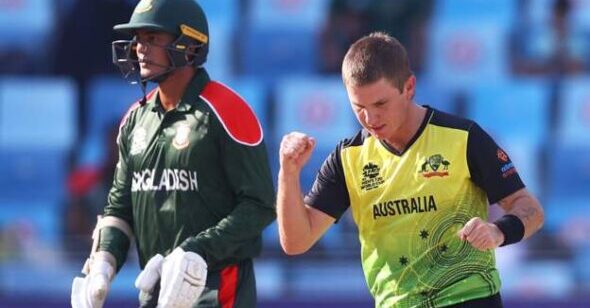 The victory secures Australia’s place at the top of Group A and means it will now face India in a rematch of their last encounter. In that match, played earlier this year, India beat Australia by 37 runs. The game will be played in Bangalore on Thursday.

For Bangladesh, it is now back to the drawing board ahead of its semi-final against Pakistan. A win would guarantee the side a place in the final for the first time since 2010, although it has never made the final of any major international tournament since its inception in 2000.

ASSAM The state of Assam in India is known for its tea plantations. It is also the birthplace of former Australian batsman Dean Jones, who was born there on 29 September 1959. Prior to this game against Bangladesh, Australia had not played Bangladesh since reaching the final of the 2010 T20 World Cup where they lost out to England by five runs. For this game, Australia made two changes to its squad, replacing David Hussey with Glenn Maxwell and Callum Ferguson with Usman Khawaja. Bangladesh replaced the injured Tamim Iqbal with Anamul Haque while Mahmudullah came in for Abdur Razzak.

Bangladesh were put into bat by Australia and they struggled against the new ball, losing both openers before Mohammad Ashraful (34) and Shakib Al Hasan (53) added some respectability to the score with a 70-run stand. David Hussey took two wickets for Australia, while Mitchell Johnson (2 for 31) and Glenn Maxwell (2 for 37) were the most successful of the bowlers.

Bangladesh’s bowling was toothless throughout, with Shakib Al Hasan being the pick of their bowlers with 2 for 22 off four overs. For Australia, David Warner top-scored with 31 from 35 deliveries, while captain Aaron Finch made 40 off 44 balls.

Australia have now beaten Bangladesh six times in a row, and over that period they have only lost to New Zealand and the West Indies.

This was Bangladesh’s 11th loss in 14 T20 internationals. The side is ranked ninth, above only Zimbabwe and associate member Ireland. However, South Africa’s World Cup exit means it has moved up one place to eighth.