Bangladesh lost the toss and went into bat against Zimbabwe. Batting after a good start, Besamal was in trouble. In the second ball of Richard Ngaravar’s over, Tamim, who was at the non-striking end, failed to return to the crease after making a last-minute decision to take a run at Vijay’s call. Shanto and Mushfiq returned to zero runs after the departure of the captain in the run-out.

Earlier, the opening pair of Tamim-Bijay added 41 runs in 8.1 balls to the account of the team. Tamim Iqbal scored 19 runs off 30 balls. He had 3 fours in his innings. Nazmul Hossain Shanto also returned with a catch in the first ball of the over after the departure of the captain. This batter continued his streak of failure by hitting a golden duck. He caught Madhaver off Evans’ ball.

After a couple of shocks, the experienced Mushfiqur Rahim also took the path to the opposite pavilion. He also caught Shanto’s return ball from Evans. The right-hander, known as Mr. Dependable, has also returned to score zero runs.

Till writing this report, after 12 overs, Bangladesh’s collection is 60 runs for 3 wickets. Enamul Bijayay is unbeaten with 36 runs at the crease. Mahmudullah Riyad is accompanying him with 1 run. 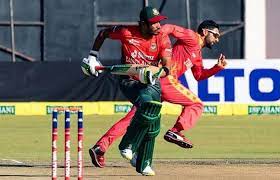 But before going down to play this match, there was supposed to be a joyful atmosphere in the Tiger camp. Tigers on the verge of playing 400th ODI match. As usual, the Tigers were supposed to celebrate the series win by defeating Zimbabwe. On the contrary, now the Tigers are facing a tough fight to protect their honor in the glory match.

Meanwhile, pace bowling coach Alan Donald is disappointed with the performance of the bowlers in the last two matches. He advised to play with more responsibility in the last match. He said, after South Africa, they were in rhythm in West Indies as well. But here Zimbabwe has put us under pressure. Our bowlers bowled well in the beginning. But failed to capitalize on opportunities to do better in the middle overs. It is really difficult to watch such a performance sitting in the dressing room. It’s not rocket science. That can be changed at will. We have more work to do. However, before that, our main concern is to avoid a whitewash against Zimbabwe.