On 3 December, Germanwatch and CAN international hosted a press conference on COP26 at the New Climate Institute in Cologne. The event was titled “COP 26: Ignoring the realities of climate science”. Many speakers shared their perspectives with us, among them NewClimate’s director Alden Meyer from the US, Kevin Conrad from Papua-New Guinea and Malte Meinshausen from Melbourne University.

In his presentation Mr. Meyer said that he had been attending these conferences since COP1 in Berlin in 1995 -at which time there were 10 000 participants-. In spite of repeated calls for greater commitment – both before and during the negotiations – it is clear that progress remains limited by a lack of political willingness.

Mr. Meyer recalled that the fight against climate change should not require any particular scientific or economic expertise, since it is merely about setting fair limits for the use of shared natural resources. The global community just lacks the political will to reach an agreement that would actually allow us to meet this challenge, he concluded.. Prof Meinshausen said that the urgency of the issue is not always well perceived by all people involved in these negotiations. They are dragging their heels by making certain concessions while expecting others from other countries at the same time -a game no one can win-.

The problem with Paris Agreement was its ambition; many delegations did not think it went far enough but could get on board thanks to China and India’s support. They later realised that their countries were going to be negatively affected by the lack of ambition shown by other parts, a situation which put them in a weaker negotiating position. If we fail to implement the Paris Agreement to the letter the problem will then become how to address climate change without losing sight of development issues.

Mr. Conrad talked about Papua New Guinea’s initiatives to protect its interests and prepare for adaptation. The geographic location of Pacific islands means they are particularly vulnerable to rising sea levels and extreme weather events -and these challenges can only be addressed through international cooperation-.

Another speaker was Jan Kowalzig from Oxfam Germany who explained that many economies still rely on coal power and/or oil and gas exports and so there is resistance among politicians to change public opinion. These countries are not interested in pursuing policies that would involve them counting their wealth in terms of CO2 emissions instead of dollars. 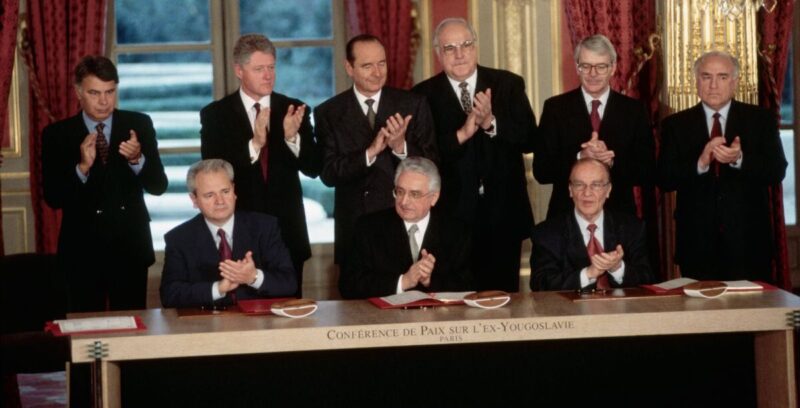 One speaker from the business sector was Klaus Töpfer, former Executive Director of the United Nations Environment Programme (UNEP). He recalled that climate change and how to solve it has been an issue on the global agenda for over 30 years; we have had many disappointments but there is still some hope as shown by initiatives such as those announced by Bill Gates and Mark Zuckerberg who will be investing billions in clean energy technology. Many businesses are already making efforts to minimise their impact on nature and these examples should encourage governments to do more as well –not just because it’s a moral duty but also for economic reasons-.

Dr Yadvinder Malhi closed the press conference with a look at the implications of climate change for biodiversity and how it affects natural resources that we ourselves depend on. Most people think of biodiversity largely in terms of its role in food production and the provision of other products such as timber, but if we don’t take care of these ecosystems they will become less productive and soon we’ll be losing all their services.

For future development strategies for reducing poverty, on top of having access to renewable energy, it’s crucial that all countries join forces with civil society organisations to help communities defend their land from being grabbed by commercial interests. Local communities have been able to keep industrial logging companies at bay but now there are other threats such as oil palm plantations which destroy forest cover and push these people out. In order to do this effectively they must raise awareness around the problem.

These comments from one of the speakers at a press conference held in Paris on 25 October 2016 to launch a book entitled ‘The Economic Impact of Climate Change: A Global Assessment’ draw attention to what’s currently posing a crucial challenge for politicians and other stakeholders around the world.

The issue is how to rethink economic policies -at both national and international levels- so that “development” can be achieved within environmental limits, which include ensuring that changes in atmospheric composition are kept within a safe range. The key question then becomes how this should be put into practice -and who should lead the way-. There have been lots of debates along these lines prompting some analysts to point out that instead of being part of the it would actually make more sense for the economy to be run by the environment.

Now, there’s certainly some sense in that but it would also be naive to assume this could ever happen; all indicators point towards economic policies continuing to be set by humans out of self-interest unless different stakeholders like campaigners and businesses start putting pressure on governments to take action. One way of doing this is through awareness campaigns highlighting how natural resources are finite; indeed, if we continue ignoring the planet’s limits it looks like business as usual for all sorts of environmental problems.