Briefing reporters on the latest developments in Iraq, Deputy National Security Advisor Tony Blinken dropped an admission that will surely inflame critics of President Obama’s strategy there: “I don’t think we’re going to leave anyone behind. The statement came after Blinken told reporters that he had no update on the situation with the Americans who were still stranded in Baghdad.

“I don’t think we’re going to leave anyone behind.The Associated Press’s Julie Pace asked: “Is there any update then on the four Americans that were believed to be still in Baghdad? Blinken then admitted publicly what has long been suspected: that the special forces sent into the city to rescue the Americans had failed. “I don’t have an update on that,” he said, declining to answer further questions about what happened because details are classified. 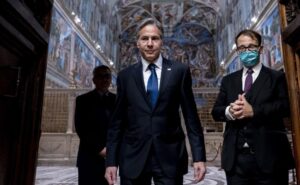 Blinken then attempted to defend the rescue attempt in Baghdad by citing history: “We will do everything we can consistent with our responsibility to protect our people and in this case obviously Iraqi security forces to try to get our people out. And I think it’s important for us not to say what we will do, but to make sure that when the time comes, whatever time that is, that we have exhausted every option and just about every option you can imagine has been tried.

He then denied reports—which have been confirmed by The Daily Beast—that US special forces had engaged in a firefight on their way to the airport after leaving the embassy. “I don’t think you should read too much into that,” he said, adding: “We were within eyesight of the airport and we didn’t want anybody to start shooting at us.
Finally, Blinken noted that President Obama is considering airstrikes in Mosul, where thousands of refugees are fleeing the Islamic State. “We are contemplating what steps we might take to mitigate their suffering,” he said.