It is a sad day for the UK as Boris Johnson starts his farewell tour of the country. The Prime Minister, who has been in power for just over two years, will be giving a speech to Parliament before taking off on an official visit to Washington DC and New York City. He will then head back home where he is due to hand in his resignation letter on Wednesday morning at 11am.

In this blog post, I want to take you through Boris’s life from birth all the way up until now so that we can understand why he left office and what happens next!

Boris Johnson was born on 19th June 1964, in New York City to British parents Stanley and Charlotte. He grew up in London and attended the prestigious Eton College before studying Classics at Balliol College Oxford University. He did not stay long however, leaving after only two terms to work for The Times newspaper as an assistant editor.

In 1988, Boris appeared on BBC Radio 4 fronting a show called The Autistic Gardener. According to Wikipedia, he presented the show with “humour and sensitivity” treating his subject matter seriously and received good feedback from listeners.

He went onto work for several other British media outlets including The Daily Telegraph and The Spectator but it was his column in The Daily Telegraph entitled “Johnson’s Life of London” that first gained him a reputation as a talented writer. According to the BBC, Boris quickly became one of Britain’s best-known journalists and also found himself nominated for several awards including the prestigious What The Papers Say award for Columnist of the Year.

Boris’s next career move was to work as a political strategist for now-Prime Minister David Cameron. In 2001, Boris himself stood as a Conservative candidate for the seat of Henley in the General Election but lost by just over 4,000 votes.

In 2004, Boris became Shadow Minister for Higher Education and soon after began his well known weekly column in The Daily Telegraph entitled “Johnson’s Life of London”. This column went on to win several awards for Boris including Columnist of the Year in 2005, 2008 and 2010.

In June 2008, Boris was elected as the MP for Uxbridge and South Ruislip in West London where he lives with his family. Around this time he also launched The Longer-Term Strategy Unit, a think tank that looks at public service reform. 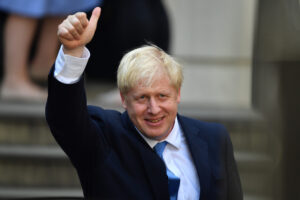 After four years as Mayor of London, Boris decided to run for a seat in parliament and won the Uxbridge and South Ruislip seat with a majority of more than 25,000 at the 2015 General Election. He went on to become Foreign Secretary in July 2016 following David Cameron’s resignation after the Brexit vote which saw Britain vote to leave the EU.

In July 2018, Boris Johnson became Prime Minister of the United Kingdom following Theresa May’s resignation after her withdrawal agreement for Brexit was voted down by a huge margin multiple times. After less than three months in power however, Boris decided to resign as Prime Minister and announced his intentions on Twitter:

“During these past few days I have chaired six meetings of the Cabinet, every one of them discussing our future relationship with the EU. We are making progress but I have to be honest with you there is no sign it will be possible to reach a withdrawal agreement, and manifestly it is not going to be possible to agree on a political declaration in time for 29th October when the EU Council meets.

It is therefore with great regret that I must inform you that having consulted Cabinet, I have decided that I am not in a position to commit the Government to taking part in the forthcoming European Council on 29th October. This is not the outcome I wanted and it is not one I believe Parliament will accept. I want to repeat that, as I said on Friday, we must and will respect the result of the referendum. It is our duty as a Government to deliver it. A new leader will have to find a consensus route forward.

From high up in Downing Street, with an incredible team of talented and dedicated colleagues behind me there, we will continue to work flat out on our domestic agenda while I also hope people will understand that while it is very hard, Brexit must be delivered. And if the new Prime Minister can negotiate a deal that includes the freedom to strike trade deals around the world – as I have sought to do with European partners in recent months – then she or he will have my full support.

Of course, I believe that with a new leader we can still end up with a better deal that works for Britain and Europe too.