Mr Dyer functioned as a surgeon in Rwanda in 1994, towards the finish of the nation’s horrendous nationwide conflict.

Treating kids who had experienced horrendous savagery because of local army bunches left him mentally scarred. 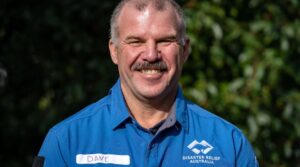 After getting back to Adelaide, he created post-horrendous pressure issue, or PTSD.

In the last part of the 1990s, Mr Dyer started filling in as a military mentor, when he said he started to encounter flashbacks.

“I had a serious breakdown at work, I was attempting to prepare respectable man for organization to East Timor when I fell into a serious opening,” he said.

“I use to cry when you referenced the word ‘Rwanda’.”

Before long, Mr Dyer left the Australian Defense Force — an association he said did essentially nothing to help him.

“According to the release perspective, I was immediately hidden away from plain view, they said to rapidly get out before I taint any other person,” he said.

“I was truly abandoned.”

A fresh chance to take life by the horns
Very nearly 30 years after the fact, Mr Dyer has found an outlet that is assisting him with handling his injury.

In 2020 he joined a Disaster Relief Australia program to help families influenced by wrecking bushfires in the Adelaide Hills and Kangaroo Island.

He was among quick to chip in for the recuperation exertion, and said the program had given him a “renewed outlook.”

“It’s a feeling of having a place, it’s accomplishing a greater objective… you get to meet new and more established veterans.”

Debacle Relief Australia’s CEO, Geoff Evans, expressed a great many veterans battling with their emotional wellness had tracked down new reason through chipping in.

“I’ve never seen a more impressive program than requesting that a veteran assistance others. Veterans have extraordinary experience, abilities, and a craving to serve,” he said.

“Our equation is exceptionally straightforward – request that veterans help others.

Mr Evans has vouched for the program’s progress in the continuous Royal Commission into Defense and Veteran Suicide.