How many strange creatures or animals live in this whole world, how many strange characteristics or strange animals live, which remains largely unknown to mankind. In an article in Nature Communications, it was written that a chameleon or chameleon can change itself to green, yellow and even blue in just 2 minutes.

What is in their body! Since there is science behind everything, there is logic, so let’s solve the issue of chameleon with logic. A Swiss researcher said in terms of his research, there are some special crystals in the body of the chameleon, which creates a special mirror, when light falls on it, the color of the body starts to change. According to Swiss biologist Michel Milinkovich, they have crystalline ‘iridophores’ just under their skin, so when the chameleon is excited, these crystals expand throughout the body and reflect yellow, blue, and even red. However, in this case, the color variation occurs depending on the size or position of the crystalline ‘iridophores’.

But this color change of chameleon happens by keeping the body cool, i.e. by keeping the temperature of the body under the sun. So the question arises: Why are different colors seen each time? First I said crystal. This is where the real thing happens. These colors come from crystals. A chameleon has many types of cells in its body. For the dark color, they have a type of pigment cells in their body. When the location of the pigment changes,

the color of the body also changes. 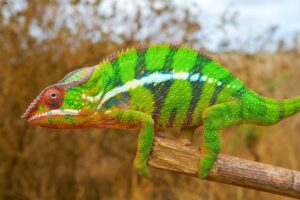 When the melanin cells spread in one place or the whole body, the color is light to dark. For example, blue crystals and yellow pigment cells mix and the chameleon becomes green. Although most chameleons or chameleons are seen as green, they are never green; Rather, this color is created. The ability to change the color of the body of a chameleon or a chameleon is entirely in their possession.

Crystals are real when it comes to changing colors, but their mood is just as important. When they are calm, their skin is green in color. But the male chameleon sometimes starts to change blue, yellow, red color when excited to scare the opponent or when it comes in contact with a female chameleon.