Sri Lanka has asked for the indefinite delay of a planned visit by a Chinese military ship in the face of intense pressure from India. Lankan President Ranil Wickremesinghe himself assured that the controversial visit of the Chinese ship will not go ahead as planned. However, less than a week after this announcement, Colombo changed its tune and allowed the ship to enter Sri Lanka.

Al-Jazeera reported that despite India’s concerns, the country’s government allowed the Chinese ship to enter Sri Lanka on Saturday (August 13).

Earlier, Refinitiv Econ’s shipping data showed that the Chinese research and survey vessel ‘Yuan Wang 5’ is on its way to Hambantota. The ship was supposed to reach Sri Lanka on August 11. Later that trip was postponed, but the ship will arrive in Sri Lanka on Tuesday (August 16) after obtaining a new entry permit, the country’s Ministry of Foreign Affairs said.

Analysts say the Chinese military ship is being sent to Sri Lanka at a time when the country is facing its worst economic crisis in seven decades.

While the Yuan Wang 5 is described as a research and survey vessel, Indian media say that the Chinese vessel is primarily a dual-use spy vessel. It is also employed for space and satellite tracking. Apart from this, this ship has specific use in launching intercontinental ballistic missiles.

Beijing can use the Hambantota port built by China as a military base. And that is where India’s concern lies.

The port, built at a cost of one and a half billion dollars, is located near the main shipping route from Asia to Europe 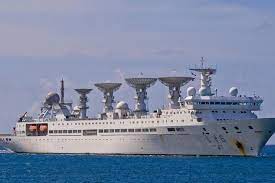 On July 28, a spokesperson of the Indian Ministry of External Affairs said that Delhi is monitoring the visit of the Chinese ship. The official also said that India will protect its security and economic interests.

Delhi-Beijing relations have been strained since two years of armed clashes along the border that killed at least 20 Indian and four Chinese soldiers. The Sri Lankan government handed over the commercial operations of the important Hambantota port to a Chinese company on a 99-year lease in 2017 after defaulting on debt.

Earlier in 2014, Sri Lanka allowed a Chinese submarine and warship to dock in Colombo, which angered India.