The United States military has admitted to carrying out a drone strike in Kabul, Afghanistan that killed 10 people. Of those, seven were children and the other three were Afghan adults. This is an important admission because it shows how drones are killing innocent civilians all over the world with no accountability whatsoever.

The attack was carried out in the Kismayo district of Somalia. It is unclear who exactly they were targeting, but various media outlets are reporting it could have been either a “suspected militant” or Mohamed Sakr, also known as Abu Abdul Rahman. There has still not been any confirmation that Sakr was killed in the strike, however.

There is good reason to doubt that Sakr was the target of the strike though. First of all, Sakr was on a United Nations sanctions list until 2012 and has never actually been accused of carrying out any terrorist attacks on American interests. The only claims against him are that he was one of many English-speaking militants in Somalia who are believed to have given interviews to Western media. 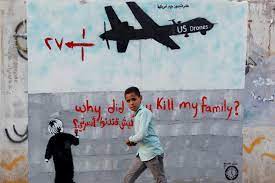 Second, the United States government itself does not believe that these airstrikes in Somalia are legal under international law. A former senior official during President Obama’s administration said that they can’t confirm whether or not Sakr was actually killed because “we know we didn’t get him.” The military official also admitted that he wouldn’t have purposely attacked a compound full of children even if Sakr was there because it “would not be a very good idea – the risks would be astronomically high.”

This is just one example of dozens, if not hundreds, that have occurred over the past decade and a half.

In fact, just two months ago the United States’ drone program killed 14 people in Yemen including women and children. Officials claimed that they were watching this group of people for days before the strike occurred. They identified “three men” out of the group who they say were “al-Qaida militants.”

The problem is that no one knows what actually happened, or why these people were targeted. There has been no follow up by the US government on this strike that killed 14 innocent people. No justification is given, they just claim that killing them was somehow in the interest of our national security.

Another big problem is that drone strikes are not actually an effective way of fighting terrorism. We’ve seen time and time again that they are actually creating more terrorists than they are eliminating.

The Obama administration’s drone strikes have killed approximately 1,147 people in Pakistan during his eight years in office. This has ended up also killing an estimated 479 civilians, 174 of whom were children. Just recently it was revealed that 90 percent of those who