The extinction of the dinosaurs was a cataclysmic event. When an asteroid hit our planet and wiped out most life, it also left its mark on the climate. The Earth’s atmosphere became poisonous to many living organisms, including bacteria that inhabit dinosaur intestines. With the end of large boney creatures came a new age for mammals who would eventually evolve into humans. But amidst the fallout and fire, one group of animals managed to survive: birds. This evolutionary success is now known for its tenacity and adaptability – but it’s also owed to a stroke of luck.

While the asteroid impact at Chicxulub crater in Mexico was big enough to wipe out more than half of life on Earth, it wasn’t vast enough to exterminate every bird species. A new study published in Scientific Reports suggests that the ability of birds to regulate heat in their bodies might have given them the advantage they needed to survive.

But before we get into how birds survived, let’s talk about what exactly was going on with Earth in the time leading up to that cataclysmic dinosaur extinction. About 66 million years ago, as the dinosaurs roamed and ruled (which they did for more than 165 million years), our planet experienced a phenomenon known as Deccan Traps – massive volcanic eruptions that continued until about 65.5 million years ago. These eruptions spewed so much lava across India and surrounding areas that it would eventually cover more than 500,000 square miles of land. The lava released a lot of carbon dioxide into the atmosphere which reacted with seawater to form carbonic acid. You probably remember from your high school chemistry class that too much CO2 in the air is bad news for living organisms – those high school chemists were on to something.

Not only did the CO2 lower ocean pH, it also lowered atmospheric oxygen, which may have been equally detrimental for life on Earth. It’s thought that these “traps” were behind at least one of the 5 major extinction events in Earth’s history. 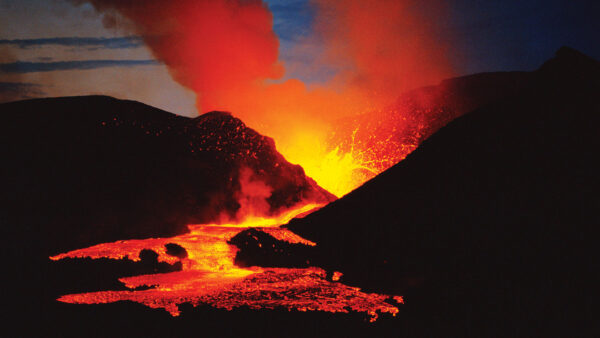 After the traps erupted their last lava flows, they continued to release gasses into the atmosphere, which scientists think may have had more of an impact on Earth’s climate than we knew. A group of scientists recently studied nearly 200 ancient soil samples to determine what CO2 levels were like at different points in Earth’s history. They found that for about 100,000 years after the carbon dioxide emissions stopped from the traps, atmospheric CO2 levels were 25 to 50 ppm higher than previous estimates.

If this carbon dioxide spike is true, it means the extinction event that followed was even more cataclysmic than previously thought. Scientists have hypothesized for a while now that high CO2 levels would have made our planet’s atmosphere poisonous to many forms of life, which brings us to birds.

Birds are often thought of as the only successful dinosaur lineage that survived the end-Cretaceous extinction event, but recent studies have found that some non-avian dinosaurs likely had feathers and probably looked a lot like birds. This study makes it clear that these species didn’t survive the mass extinction, but they were able to fly and regulate body temperature through their feathers. Feathers are great for this because they trap air, which has a very high specific heat capacity.

Since water is denser than air, it can absorb more heat. Birds use their feathers to effectively trap a layer of hot air next to their skin so they can stay warm even though the outside temperature might be lower than what the thermometer says. This cavity of trapped air helps birds control their body temperatures by either reflecting solar radiation back into space if they’re too hot or by releasing heat into the air if they’re too cold.

While we don’t know how birds were able to survive such a devastating extinction, this feather thermoregulation hypothesis is definitely a step in the right direction. The results seem like they could be applicable to any form of life that survived the mass extinction event.