Former pro wrestler Daffney Unger was found dead Thursday in her Atlanta-area home after she appeared in a disturbing Instagram video the night before. She was 46.

“It is with great sadness I have to let you know that my daughter Shannon Spruill … Scream Queen Daff, passed away suddenly last night,” Unger’s mother, Jean Tookey Spruill, wrote. “Absolutely heartbroken.”

Neither the Gwinnett County Medical Examiner’s Office, which confirmed her death to TMZ, nor her mother revealed the cause. WWE also announced her death.

In an Instagram Live on Wednesday night, Unger discussed her symptoms of brain injury while holding what appeared to be a small gun, outletsreported.

The video, later deleted, showed an agitated Unger telling viewers that she believed she was suffering from the concussion-related chronic traumatic encephalopathy, or CTE, and asked that her brain be donated for examination, Deadline reported. The degenerative disease, linked to repeated blows to the head, can only be identified posthumously. 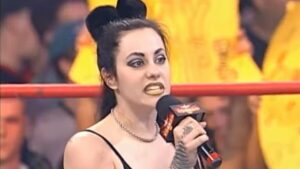 “I don’t want to do anything to hurt my brain. I want to be studied,” Unger said. “I want the future generations to know. Don’t do stupid shit like me.”

Unger became known as the Scream Queen for shrieking in the ring. Her real name was Shannon Spruill.

She performed in World Championship Wrestling in the late 1990s and early 2000s, and later appeared in Total Nonstop Action Wrestling, according to Deadline. She worked for Shine Wrestling on camera after that, but did not wrestle.

She retired due to her injuries, a friend and fellow wrestler told the New York Daily News.

“She was a born performer,” Lexie Fyfe told the paper.

If you or someone you know needs help, call 1-800-273-8255 for the National Suicide Prevention Lifeline. You can also text HOME to 741-741 for free, 24-hour support from the Crisis Text Line. Outside of the U.S., please visit the International Association for Suicide Prevention for a database of resources.