Facebook’s Meta mission was laid out in a 2018 paper declaring ‘The Metaverse is ours to lose.’ The company has been working on the project for years, but it feels like they are just getting started. Facebook wants to use VR and AR technology to create an immersive experience that will allow users to travel anywhere, interact with anyone, and do anything without ever leaving their home. In the end, Facebook wants to own this online space and it is clear they are not going to stop anytime soon.

The core of Facebook’s Metaverse will be a place where users can meet up in a virtual worlds in order to play games, hang out with friends, attend events or even work in a virtual office. If you use Facebook, Instagram or WhatsApp you will be given your own personal digital space to socialize with other users. The technology isn’t quite there yet, but the goal is to make it possible for millions of people to interact simultaneously in virtual reality.

To create this Metaverse Facebook will not only use their extensive network of services but also rely on other technologies, such as virtual reality headsets and artificial intelligence. However, for this online world to really take off Facebook needs the hardware to get there too. That’s why they are building their own headset that will bring all these pieces together in a single package.

Today we can exclusively reveal what this device will look like thanks to the combined efforts of several people with direct knowledge of the company’s plans. It is called ‘Portal’ and it looks like a combination between VR goggles and Amazon’s Echo Show . The device has a large, flat front face that contains two eyes and resembles a computer monitor. Portal supports voice interaction as well as written commands and is tightly integrated with Facebook’s artificial intelligence. The device contains a large speaker that can easily fill up a room and there is also an option for connecting to your favorite speakers through Bluetooth or auxiliary cable. 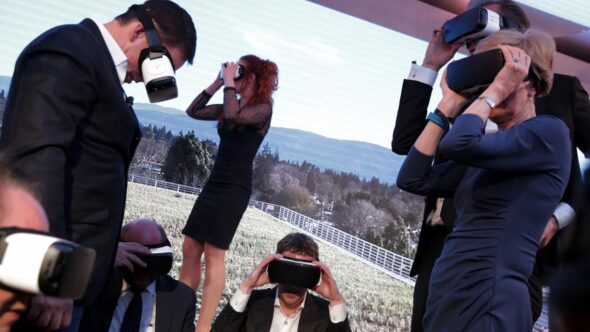 Portal needs both its depth sensors and infrared camera (to track hand movements) to work well. For the majority of the time, Portal will rely on its included stand to position the screen at a comfortable distance and angle. However, Portal can also be removed from the stand and used like a tablet. The device comes with a stylus that slides into the back of the device when it’s not in use.

Portal is an incredibly ambitious device and Facebook wants to position it as a social hub for the whole family. It will use facial recognition to identify members of your household and offer appropriate content. For example, if mom is in the kitchen cooking or dad is working from home, Facebook Portal will start showing relevant videos on the screen.

If you have multiple Portals, you can link them together so that everyone at home can see each other while talking. All the video calls are end-to-end encrypted and Portal also features an option to disable the camera and microphone with a single tap. The device comes with Amazon Alexa support but you don’t have to use it if you prefer Google Assistant or Microsoft Cortana. Facebook is hoping that its device will become a central part of the home and it’s going to be very aggressively priced starting at $499 per unit.

Facebook is hoping that its device will become a central part of the home and it’s going to be very aggressively priced starting at $499 per unit.