Faith groups and pilgrims led COP26 climate protests in Glasgow on November 30th. The rally was organized by the Peace and Justice for Climate Group, a coalition of religious organizations that includes Christian, Muslim, Hindu and Sikh communities. This is about our faith, said one of the protesters. We’re here to say there are better ways.

The group marched from Glasgow Cathedral to George Square carrying banners that read Fossil fuels are not compatible with life and Climate change is real! Other chants included we want justice and save our planet now.

At the closing rally speakers argued that climate change is an economic problem, not just an environmental one. They also insisted there are alternatives to extracting more oil and gas.

Reverend Dr Andrew Morton said We believe in creation care even when it feels like no-one else does. He added: We want to see leadership from our political leaders. We want to see Scottish Government and the UK government act now act on renewables; act on carbon capture storage; act on energy conservation; act now, not tomorrow because time is running out. 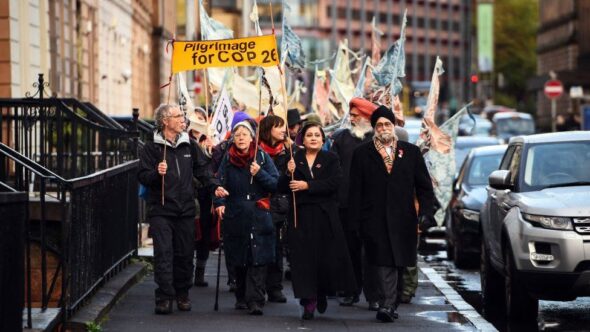 The rally was organized following the publication of a letter by Pope Francis in which he accused human beings of extortion, arrogance and pride towards God’s creation. Archbishop of Glasgow Philip Tartaglia said climate change is an issue that should lead us to examine our lives, our behavior and the way in which we use things.

Religion and faith communities have an obligation to protect creation and climate change is a major threat to the planet, hence I found it very important to come out and show my support today.

Scotland has seen an increasing number of actions by local authorities in support of the Paris Agreement. Earlier this year Scottish leaders joined a worldwide movement of cities, states, regions and countries committing to 100 percent renewable energy by 2040 in order to limit global warming below 2°C.

In Glasgow, Scotland’s largest city and home to over 600,000 people, authorities have committed to make it a zero waste city by 2040. The city also has its own renewable energy strategy and a climate change adaptation plan . Glasgow has been involved in a number of campaigns to engage the public , including using art and its People’s Palace to promote awareness of environmental issues.