French Minister Jean-Yves Le Drian has condemned US and Australia for lying over the new security pact that prompted Paris to recall its ambassadors. Le Drian told reporters on Tuesday, “The statements made by the American president are lies.” He was referring to Donald Trump’s remarks last week about an agreement signed with French President Emmanuel Macron at their first meeting in Brussels. The two countries agreed not to release details of a bilateral accord before consulting each other, but it appears that France was excluded from any conversation about the protocol. “I find it hard to believe that the important and honorable French diplomacy could have been excluded from a deal concluded between several countries, including Australia,” Le Drian said.

On Friday, Trump confirmed reports Australia had joined a new intelligence sharing arrangement with Britain, Canada, New Zealand and the US – known as the Five Eyes alliance – but conspicuously left out France. And in a media conference in New York, Trump said Australia had reached a new security agreement with the US following Macron’s visit to Washington DC last week. “We have a very special relationship and I wanted to thank you,” Trump told reporters before confirming the deal was signed off on during Macron’s state visit.

Le Drian’s comments come as tensions between the US and France continue to escalate over the Iran nuclear deal. French ambassador to Washington, Gerard Araud recently revealed a letter Macron sent Trump about the contentious agreement was being ignored by the White House. The new security pact signed by Australia has been considered a serious snub by many in France, considering it was only signed off during Macron’s visit to the US just over a week ago. Le Drian said France was “not asked for any accord” and that it had not been involved in bilateral negotiations between Australia, the US and other countries. 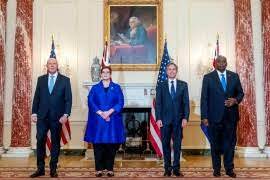 The French government has since expressed its annoyance at being left out of talks regarding the agreement, which appears to show a lack of cordial relationship between the US and France. Last week, Macron said Australia was committed to “developing its own independent foreign policy” when quizzed about the new security deal.

Comment: And Australia and the US lied to France and the world. As we have written for years, this is what “Five Eyes” means: Five countries that agree to share intelligence with each other and not tell anyone else about it. Two of those five get together and don’t even bother telling either of the other three. It’s like the mafia’s Omerta, the code of silence.

“You never tell another member of your family anything you wouldn’t want to read in the newspaper next day.” That is how they work together. The only members who are ever told anything are Britain and America (in most cases Britain knows first because she’s closer). And that is what you are seeing in the US-Australia agreement. The US has told Australia to go suck eggs about it.

Trump said it in 2018 at a press conference in Washington with Macron: “Very rarely do we have any secrets.” That is verifiable by finding out how many times he has called reporters, Sky TV or other media outlets and said, “I can’t tell you what I’m going to do or how I’m going to do it because that would be giving away secrets.” He ALWAYS says that. So he has let five other countries share his secrets and told Australia, “Just keep your mouth shut about this for now.”