Hispanic Heritage Month is a time to celebrate Hispanic culture and the many accomplishments of our community. But is it inclusive enough?The answer to this question might not be as simple as you think. Some people believe that this month should be about celebrating all cultures, including Latino culture, while others argue that it’s not necessary at all because “anyone can come from anywhere.

In this post we will explore both sides of the argument and ultimately decide if Hispanic Heritage Month is inclusive enough or not.

*The photo above is a potential image for a Hispanic Heritage Month pin celebrating Latino culture. Image courtesy of Pinterest.*

Someone who feels that October should be about recognizing cultures other than Latinx (the gender neutral term people use to refer to the Hispanic community) is Sam Escobar, an American journalist who identifies as Afro-Latinx.

In a Twitter post, Escobar responded to the question “Do you have an opinion on Hispanic Heritage Month? by saying that there should be more than just one month in order to celebrate diverse cultures. 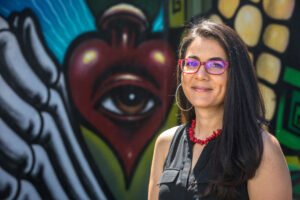 “I think it should be expanded,” he tweeted.“There are so many different Latin groups and they all have their own cultures and origins that should be celebrated.

On the other hand, someone who believes that Hispanic Heritage Month is inclusive enough is Carmiel Banasky. In a tweet, she says that there is one month in order to celebrate all Latinx people and their contributions.
“Just because not everyone identifies as such doesn’t mean they don’t deserve to be acknowledged,” she tweeted.

The last day of Hispanic Heritage Month is October 15th, 2018. Whether or not you feel that this month should be expanded, the goal of this post is to get people thinking critically about Hispanic culture and what it means to them.
The photo above shows a potential image for a Hispanic Heritage Month pin celebrating Latino culture.
Image courtesy of Pinterest. We would love to hear from you on this topic! Please send your comments, questions, and feedback to the Undocumented Student Program at usp.asu.edu or tweet us ASU_Undocumented!* We can’t wait to hear what you have to say!

*What do you think? Is Hispanic Heritage Month inclusive enough or should it be expanded? *Let us know what you think by tweeting us ASU_Undocumented ! -The Undocumented Student Program at ASU