The eight Hong Kong activists, including a student leader and a prominent pro-democracy figure have been on trial for unlawful assembly after staging an anti-China protest in the city’s busy central district. The defendants were arrested last month after they staged a vigil to mark the 27th anniversary of China’s Tiananmen crackdown outside Beijing’s liaison office. The defendants include student leader Joshua Wong, Nathan Law and Alex Chow who were recently elected to Hong Kong’s legislature in elections that saw a record turnout of voters. The eight all pleaded not guilty to one count of unlawfully entering a closed-off area outside Hong Kong’s liaison office on June 11 despite repeated warnings from police officers.

Student leader Joshua Wong, one of the leaders of the mass pro-democracy Umbrella Movement rallies in 2014, is accused of obstructing police officers. The other seven defendants are reportedly members or supporters of Demosisto, a political party launched by Wong and Law after they were both released from prison following their imprisonment for involvement in an unlawful assembly surrounding protests against China’s restrictions on civil nomination in the former British colony.

According to reports, lawyers for Wong said he was attacked by police officers. The defense has asked that Wong’s statement to police be excluded from evidence because it would incriminate him, but this was opposed by the prosecution, the South China Morning Post reported . One of them, Alex Chow, was quoted by his party as saying they were wrongly arrested and the case should be thrown out. He further called the trial a political prosecution to intimidate those who want genuine universal suffrage.

The protest outside the liaison office happened just hours before a massive march in Hong Kong marking the anniversary of China’s crackdown on protestors in Beijing’s Tiananmen Square on June 4, 1989. While mainland China has never allowed a public commemoration, Hong Kong has in recent years held small-scale memorials attended by tens of thousands to mark the anniversary. 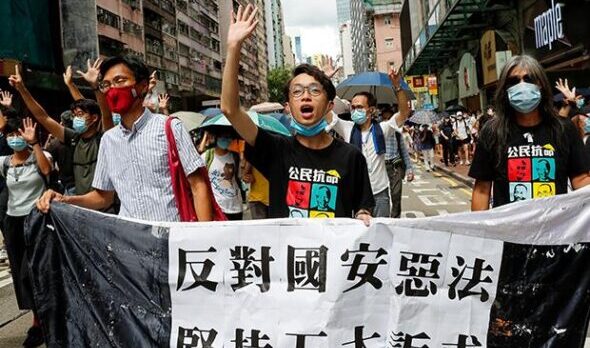 However, the numbers have dropped dramatically after 2014 when police began tightening their grip on participants, including banning them from carrying anything that could be used as a tribute or masking their faces with scarves and goggles. The Hong Kong government did not immediately comment on the trial, but Hong Kong prosecutors have previously stated that public rallies must be approved by police.

This case has been raising concerns of freedom of expression and assembly in the city. Amnesty International has called for the release of all peaceful protesters detained in Hong Kong after a string of arrests during protests marking the 25th anniversary of the Tiananmen Square crackdown.

Activist groups are marking the 24th anniversary of China’s Tiananmen Square crackdown by calling for a probe into allegations that Beijing has abducted and possibly killed dissidents in Hong Kong. Hundreds gathered outside the Chinese government’s liaison office amid a heavy security presence. The protesters, mostly young people clad in black, demanded to know what happened to five booksellers who disappeared from the city last year only to turn up on the mainland.

The five are believed by some to have been kidnapped by Chinese security forces because of their work at a publisher and bookstore that specialized in books critical of China’s Communist Party leaders, though Beijing has denied any role. A Reuters report earlier this month cited two people with direct knowledge of the matter as saying that one of the men, Gui Minhai, who disappeared from Thailand in October, was being held for investigation by Chinese authorities over a traffic incident years ago.