trees; Green leaves and stems are surrounding plants that provide oxygen, an essential element for animal life. However, some trees transcend this identity due to their unique characteristics and qualities. One such tree is ‘Hyperion’.

The tree has recently come into the news for a number of reasons, one of which is that just looking at Hyperion can land anyone in jail. And such laws have been imposed by the US government. But why? Let’s listen to the story!

Hyperion is the tallest tree in the world. It is located in ‘Redwood National Park’ in California. It is named after Hyperion, the father of the mythological Greek moon goddess Selene.

According to Guinness World Records, the tree weighed approximately 209 metric tons in 2019! The age of the tree is approximately 600 to 800 years. But from now on anyone who wants to see the tree will face a fine of US$5,000 and six months in jail.

Also, there is no good road to approach the ‘Hyperion’ tree. As a result, visitors over the years have made their own way to see the tree. As a result, the natural habitat of other animals and plants in the park has also been damaged. Park workers also found garbage and human waste on those roads.

Meanwhile, the park authority wrote in a statement, “As a visitor, decide for yourself whether you will be a partner in the preservation of this unique natural environment or a partner in its destruction.” 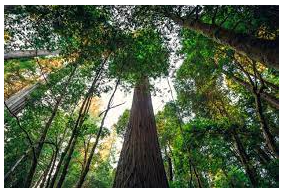 Originally a ‘Coast Redwood’ variety of tree ‘Hyperion’. Its height is more than 380 feet. This tree is 1.25 times taller than the Statue of Liberty. In 2006, two researchers found this tree. Also there are many tallest trees in the world in this park. And the height of two trees named Helios and Icarus here are 377 feet and 371 feet respectively.

A ‘redwood tree’ can live for a long time. Park authorities said in a statement. California’s Redwood National Park has asked visitors to stay away from the tree.

Because that area of ​​the park has suffered due to the popularity of the tree. It has also been warned that there is no mobile phone network in the area and it could cause unnecessary inconvenience if someone gets lost while walking around.