At least 10 more people died after drinking adulterated liquor in India’s western state of Gujarat. Due to this, the death toll in this incident has increased to 38 people.

On Wednesday (July 27), officials of the state brought this information forward, according to a report by the news agency Reuters.

💨On Tuesday, 21 people lost their lives due to adulterated liquor. Meanwhile, the police have started an investigation into the incident last Monday and have arrested six people so far.

💨Police officer Ashok Kumar Yadav told Reuters, “Some of those admitted to hospital in critical condition after drinking fake liquor died during the night.

Victims drank methyl alcohol, mistaking it for alcohol. They drink it almost without mixing it with anything.’

According to the Indian press, this incident of death occurred due to adulterated alcohol in several villages of Ahmedabad and Botad districts of Gujarat. 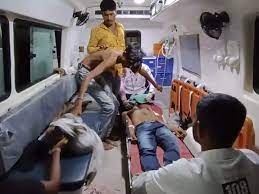 Police have arrested several people from these areas. The arrested are said to be involved in selling fake liquor in the village.

Methyl alcohol actually also known as wood alcohol, the news agency says. This product is unsafe for human consumption and  used in everything from paint thinner to fuel, pesticides and anti-freeze.🔱