America’s leadership on climate change has never been more critical. We need to meet this challenge. Joe Biden

The United States is the only country in the world that has not ratified the Paris Agreement, and our nation faces a big test this week. This Wednesday, former Vice President Joe Biden will be addressing members of Congress about what America needs to do to stop climate change. He’ll be making his case for why we have an obligation to lead against this crisis, but are sorely lacking commitment from our current administration.

While President Donald Trump has a history of publicly denying the existence of this crisis, his administration’s recent actions indicate that he is unwilling to lead our country, and unwilling to do what it takes for future generations.

In addition to withdrawing from the Paris Agreement, this administration has also attempted to increase oil and gas production by rolling back environmental protections intended to address climate change. In fact, Trump’s current policies would make the United States one of the biggest contributors to greenhouse gas emissions in the world.

With our leadership on this crisis hanging in the balance, we need a candidate that isn’t afraid to stand up and refuse to be silent while the world waits for America’s leadership. We need a Democratic candidate that is ready to meet this challenge head on. 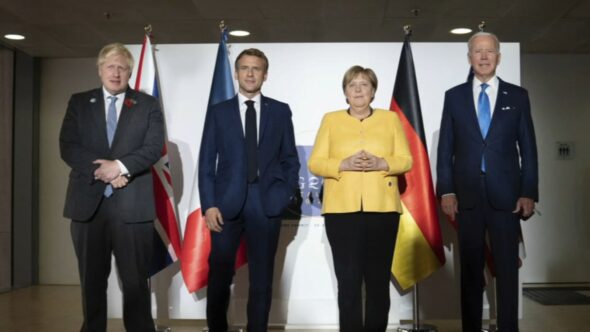 Only one candidate has the record, experience, and commitment necessary to address the climate crisis head on: Joe Biden . Since being elected as Senator of Delaware in 1973, Biden has had a strong stance against big oil , fought for environmental protections, and supported policies that encourage clean energy investments.

As Vice President, Biden supported policies that cut down on greenhouse gas emissions , while also encouraging the development of clean energy technologies. He helped establish the Recovery Act, which was an unprecedented opportunity for cities and towns to make investments in renewable energy systems.

Joe is right—we have a moral responsibility to act on climate change, and it is time to stop letting other countries take the lead. It’s time for America to step up and meet this challenge head on. If you agree, add your name now to support Joe Biden .

For more information on this topic, please go to  Biden’s Plan for a Clean Energy Revolution .  Please also see what the candidates have said about climate change at Climate Change: A Pocket Guide  for Democratic Candidates.

You can also check out what has been said about climate change on the On The Issues website.

After you’ve signed, share this message on social media: We need a Democratic candidate that is ready and willing to meet the challenge of climate change head on. If we want America to lead, it’s time for Joe Biden