The Kardashian-Jenner family couldn’t be happier for Kourtney Kardashian and Travis Barker.

On Sunday, shortly after Kardashian, 42, found her happily ever after with Barker when the Blink 182 rocker, 45, popped the question with a romantic beach proposal, the Poosh founder’s famous family shared their excitement on social media.

On Twitter, Kim Kardashian West shared a slow-motion video of the couple sharing a kiss, complete with a close-up of her sister’s massive engagement ring. “KRAVIS FOREVER,” she wrote alongside the tweet.

Sister Kylie Jenner also celebrated Kourtney’s new chapter, sharing photos on her Instagram Story of a rose-adorned dinner table, as well as a zoomed in image of Kardashian’s sparkler.

Mom Kris Jenner also gushed over the news. “Congratulations to the most beautiful, adorable, affectionate, fabulous, made for each other couple in the world! Love you guys!!!!!!” 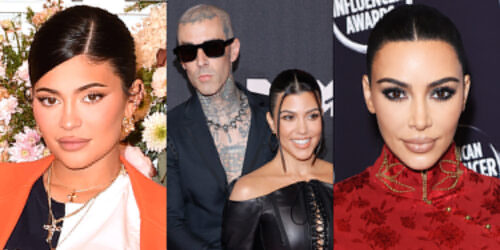 “Congratulations @kourtneykardash and @travisbarker I’m so happy for you guys love you guys so much!” Landon, 18, wrote in an Instagram Story post of the newly engaged pair kissing.

“So happy for you guys I love u both!” Alabama, 15, echoed on her respective Instagram Story while giving a look at Kardashian’s ring.

Atiana, 22, meanwhile, shared a shot of Barker holding Kardashian’s hand, where she showed off her new bling, alongside a sweet pic of the couple kissing.

Kardashian also confirmed the exciting news on Instagram by sharing pictures from the romantic proposal with the caption, “forever @travisbarker.

PEOPLE confirmed Kardashian and Barker’s relationship in January. They made their romance Instagram official in February after Valentine’s Day when the reality star shared a photo of the pair holding hands.

This marks Kardashian’s first engagement, but she shares her three children — Mason, 11, Penelope, 9, and Reign, 6 — with ex Scott Disick.

Barker was also previously married to Melissa Kennedy from 2001 to 2002, and briefly dated Rita Ora in 2015. Kardashian was previously linked to Younes Bendjima and Luka Sabbat.

In early April, Barker made his love for Kardashian permanent by getting her name tattooed on his chest.

Since then, their relationship has continued to heat up. From the pair packing on the PDA during a romantic trip to Utah to sharing a passionate kiss at the UFC 264 fight in Las Vegas, they haven’t shied away from showering one another with affection.