Another tribal group has disappeared from the world. On Monday (August 30), news agency AFFI reported that for the past 26 years, he had been living a completely isolated life. The name of the deceased is not known.

On August 23, the unidentified man, known as ‘Man of the Hole’, was found dead outside the man’s thatched hut. But there was no sign of violence.

He is believed to have died of natural causes. He was about 60 years old.

To the people of the world, that person was known as ‘hole man’. The unnamed man had been living alone in the forest for the past 26 years. He was the last of an indigenous group living in the Tanaru region on the Bolivian border.

Most of his tribe are believed to have been killed in raids by illegal herders in the early 70s. In 1995, six members of the man’s community were killed. Since then he was the only survivor of his community.

Since 1996, agents of Brazil’s ‘Indigenous Affairs Agency (FUNAI) have kept an eye on him after learning of his survival. During a routine patrol, Funai agent Altair Hose found the body outside his thatched hut. 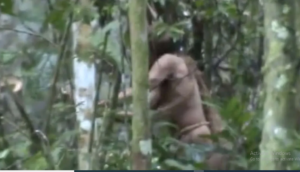 Indigenous expert Marcelo dos Santos told local media that the man may have put the feathers on him after realizing he was dying. He also said that the person may have died 40 to 50 days before the body was found.

Marcelo dos Santos said since the man had no contact with the outside world, it was not known what language he spoke or what community he belonged to.

There are about 240 indigenous peoples in Brazil. Most of these are now under threat. This is because illegal miners and farmers are encroaching on their land.