It has a bustling summer for new Cardiff full-back Liam Williams and it gives no indication of easing up.

He was essential for the Wales side that lost 2-1 in a series in South Africa, kicked wedded and off preparing with new side Cardiff after a slow time of year move from Scarlets.

What’s more, it vows to be one more furious a year with the World Cup in France approaching next September and a United Rugby Championship association season beginning not long from now.

Williams is focusing on a third worldwide competition and 100 global covers with 81 Wales Tests and five something else for the British and Irish Lions added to his repertoire up to this point.

“The point is do the following World Cup which is this time one year from now,” said Williams.

“In the event that I can to get that ideally I can get to 100 covers also. That is only a fantasy. Simply winning one cap is an honor, yet having made significant progress and having a couple of left to go is at the rear of brain. 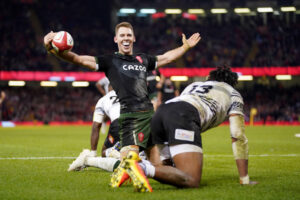 “For my purposes, it’s tied in with remaining here fit first and playing great for Cardiff, getting a run of games and ideally getting chosen for the fall and Six Nations.

“I will simply be giving my best off the throw to keep myself tantrum and accessible for determination.”

“I figure we ought to have left away with a series triumph in the event that I am completely straightforward,” he added.

“The principal game moved away from us as of now for certain calls we had no control over ourselves.

“In the wake of losing the first and winning the second, it was difficult into the third.

“We picked practically similar group for the three games and returning to-back is hard.”

“It was an incredible day,” said Williams.

“The downpour held off and everyone celebrated. The discourse worked out positively, much better than I naturally suspected it would.

“My two best men demolished me in their discourses and it was an overall extraordinary day.

“I’m not excellent at weddings since I get extremely close to home so I cried multiple times.