Linda Evangelista has been quoted as saying “We don’t wake up for less than $10,000 a day” in regards to her (and fellow supermodels Christy Turlington and Naomi Campbell’s) financial demands when they were at the height of their careers in the 1990s. And while she has spoken in the past about doing a few Fraxel treatments and getting breast implants , in a new interview with The Edit , she’s finally revealing what cosmetic procedures really looked like in the ’90s.

“I used to do this harsh treatment called C02 microdermabrasion, which is like sweeping brambles across your face,” she said. “In the Nineties, everyone had lasers on their faces. I was very laser-happy—I got so many of them I ended up having to take medication for a while because my skin was so inflamed.”

She also touched on how social media has changed beauty norms and why she believes that the industry is way more inclusive than it used to be.

“Now, I think we’re past all of that and people do what they want,” she said. “The makeup artists will insist on putting some red lipstick on you, and suddenly you feel like a transgendered person and the illusion is broken. The fantasy of how we look doesn’t exist anymore.” She added: “It’s really nice because now diversity is celebrated. When I was younger, nobody wanted me on their cover—they would say ‘She didn’t sell’ or ‘Who wants to look at a black girl?'” (Another supermodel who opened up about struggling with racism in the industry is Naomi Campbell .) And as for her own personal routine? Surprisingly, it’s pretty low-key.

“Right now, I don’t really do anything,” she said. “I’ve got so many freckles that my dermatologist told me not to use lasers or peels.” And while the supermodel is adamant that she doesn’t believe in anti-aging products these days, she did admit that sunscreen is her one exception. “Sunscreen is the only thing I will always wear—that’s what keeps you looking young,” she said. “You can be 110 years old and have great skin if you’re wearing SPF 50 every day.”

Linda Evangelista says her lips were ‘a disaster’ after plastic surgery

The supermodel says her collagen injections became ‘a disaster’ in the early ’90s. Subscribe to our daily newsletter , and get all your celebrity news every day! 20 shares 6 View comments Last year’s Vogue cover star Linda Evangelista has opened up about cosmetic procedures gone wrong. In an interview with The Edit , the 46-year-old Canadian revealed that she underwent a series of collagen injections when she was in her twenties which left her lips “a disaster” for years. “I did it in my early twenties and it was a disaster. I had lumps everywhere. It looked like cottage cheese,” she said. “Everyone made me feel so bad about it that I started denying that I’d ever had anything done, but of course you can still see the lumps if you look closely.” The supermodel, who has been on the cover of Vogue more than 20 times, insists she no longer gets work done – even though her friends regularly ask her for advice – and instead uses protective styling to stop herself getting older too quickly. 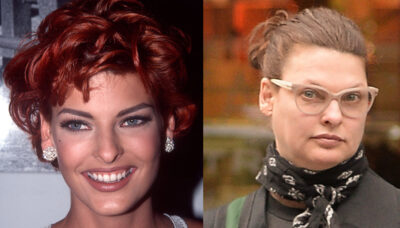 “My beauty philosophy is: Don’t let them see you age,” she said. “I don’t believe in Botox or peels or lasers . . . It’s really nice now because diversity is celebrated. When I was younger, nobody wanted me on their cover—they’d say ‘She didn’t sell’ or ‘Who wants to look at a black girl?’ It’s way better now.” And despite having worked with some of the best makeup artists in the business, Evangelista claims she doesn’t like wearing too much of it herself. “This is going to sound bad but even if someone says you’re gonna have your face done and then they’re going to do your hair and makeup I’m always kind of grateful because I don’t want that many people fussing over me,” she said. “I just let them do what they need to do.” RELATED: Linda Evangelista talks fashion, working, and modeling See a behind-the-scenes video of Linda’s Vogue cover shoot below:

The supermodel discusses her beauty routine with writer Daryl van Wouw. Subscribe to our daily newsletter , and get all your celebrity news every day! 20 shares 6 View comments We have a feeling this Linda Evangelista interview is going to break the ‘net. In behind-the-scenes footage from The Edit magazine, the 46-year-old Canadian model opens up about her beauty philosophy and looking like “a transgendered person,” in addition to explaining why she doesn’t wear makeup very often (FYI —she’s done more Vogue covers than we can count). She also touches on the subject of her childhood in Canada, revealing that she does not like spending time up north.

Here are some highlights from the interview with writer Daryl van Wouw (Vogue has yet to post the clip online): • On why she doesn’t wear makeup very often: “I don’t like makeup when I work out . . . It smears all over you and gets in your eyes.” • Explaining what happened to her lips after undergoing cosmetic procedures in the ’90s: “I did it in my early twenties and it was a disaster. I had lumps everywhere. It looked like cottage cheese.” She later adds: “I was trying to fix myself through surgery and looking back, I wish I hadn’t done anything.”