The son of the house has returned home. At Nacional, where the epic of Luis Suarez began, he returned to the home in the late afternoon of his career.

After ending his contract with Atletico Madrid, the Uruguayan has chosen his boyhood club as his next destination after rejecting a lucrative offer from the United States.

However, Lionel Messi is in a bit of trouble with his friend Suarez’s new club!

After Suarez joined Nacional, the club posted a video message from his friend Messi on their Twitter account. In the video Messi wished his former team-mate well and added,

“We Newell’s (Messi’s boyhood club) fans don’t have good memories of Nacional. But you know I love you so much and would do anything for you. We will be watching Nacional from now on. Good luck to you.’ 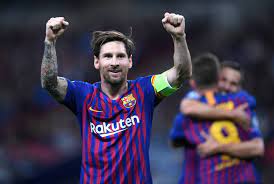 Meanwhile, on Sunday, thousands of Nacional fans welcomed the ‘boy of the house’ Suarez. Suarez is overwhelmed by their love and madness.

Happy to be back at Nacional, Suarez wrote on Twitter, ‘Proud to be back home with my family. Thank you from the bottom of my heart for the welcome.

It was exciting. I am where I want to be. I want to win everything with Nacional.

Meanwhile, Suarez’s friendship with Messi is not unknown to football fans. The two Latin football greats spent the best part of their careers together in Barcelona.

Messi and Suarez formed ‘MSN’ along with Neymar. The Catalan club tasted the last ‘treble’ victory thanks to the magic of these three maharathis in the attack.

Suarez moved to Atletico Madrid from Barcelona in 2020. After a year, Messi said goodbye to Barca and entered the French champion PSG.🔱