In Madhya Pradesh, a tiger suddenly came from the forest and attacked the locality. Tries to drag a one and a half year old child.

The child’s mother then tried to fight the tiger with her bare hands to save the child. The fight lasted for several minutes. Later the locals came and rescued them. The injured mother and child were admitted to the hospital.

According to BBC news, this incident happened near Bandhavgarh Tiger Reserve area of ​​Madhya Pradesh last Sunday. Archana and her son were in a field at the time of the incident.

Animal attacks on people living near tiger reserves in India are not new. In an interview given to BBC Hindi, the villagers said that not only tigers, but also elephants entered their villages and destroyed crops.

According to a report in the Times of India, the tiger was trying to drag the child by placing its teeth in the child’s head. Then the mother tries to fight with the tiger to save the child.

Hearing the screams of the woman, the villagers rushed there with sticks and chased the tiger away. 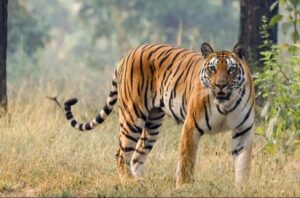 It is known that the mother’s lungs are obstructed. He also has deep wounds on his body. And the child suffered a head injury.

A doctor told BBC Hindi that the child’s injuries are not serious. But the mother was seriously injured. Jabalpur city civil surgeon Mishti Ruhela said that the mother and baby are being treated in the intensive care unit (ICU). Both have been injected with rabies.

Meanwhile, the tiger has created panic among the villagers. An official of India’s forest department told reporters that the biggest challenge for their department now is to find and trap the tiger.

Senior government official Sanjeev Srivastava told BBC Hindi that measures are being taken to ensure that no more tigers escape from the reserve.

People living near forests and national parks across India have seen an increase in human-wildlife conflicts.

Experts say natural habitats are being destroyed due to rapid urbanization. Because of this, wild animals are forced to attack various villages and towns in search of hunting and shelter.