“You are not only the leader of Russia, you are the leader of the whole world,” Hlaing told Putin. Because you have maintained stability around the world.

The annual conference of the Eastern Economic Forum (EEF) is underway in the eastern Russian city of Vladivostok. Representatives of several countries including China, India, Japan, Myanmar participated in the conference.

Myanmar Army Chief Hlaing arrived in Russia last Sunday (September 4) to attend the conference. He held a separate meeting with the Russian President on Tuesday (September 6) during the main conference.

This is Hlaing’s first meeting with Putin since a military coup seized power in Myanmar in February last year. And he praised the Russian leader in the first meeting. The Kremlin issued a statement on the meeting between Putin and Hlying.

According to the statement, Hlaing told Putin, “Russia has developed greatly because of you.” In other words, it was during your rule that Russia became the leader of the world. We consider you the leader not only of Russia, but of the whole world. Because you have ensured the stability of the entire world.’ 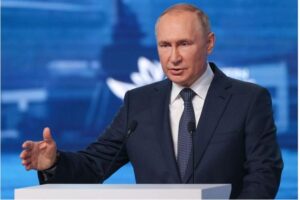 In response, Putin said, ‘Myanmar is our long-standing trusted partner in Southeast Asia. Our relationship is constantly improving positively.

Myanmar’s junta authorities said in a statement that the two leaders had a friendly and open discussion on bilateral cooperation. Apart from this, they discussed the current relations between the two countries and the international situation.

Since these two incidents, Myanmar and Russia have become increasingly isolated diplomatically.

Russia is looking to strengthen relations with countries in the Middle East, Asia and Africa. On the other hand, Myanmar’s junta government is trying to find new allies in the face of Western sanctions. Since the coup there has been a mass movement in Myanmar.

Junta forces are struggling to deal with pro-democracy resistance fighters. As a result, the country’s economy is on the verge of being crippled.