The biggest and most mysterious palace in Britain. In terms of size, this Hamilton Palace in East Sussex is bigger than Buckingham Palace in England. This palace is better known as the ‘Ghost House of Sussex’ to the locals. This palace was built for British billionaire Nicholas van Hoogstraten.

This palace is quite far from the main city. Hamilton Palace is on the A22 South in Uckfield. The construction of this palace started from 1985. But the construction work is not over. As a result, this huge palace has been lying empty for many years. A neighbor of Nicholas said, none of the neighbors understand how far the work has gone, how much work is still left. This palace is surrounded by thick forest, trees. On top of that, Nicholas, the owner of the palace, also put a high fence around the land.

Warning notices are posted on boards around the palace. No one can enter the three boundaries of the palace even if they try a thousand times. White boards on the fence also have black letters saying ‘Shooting going on inside’, ‘Beware of dogs’ etc. Nicholas’s trouble with the neighbors also got in the way. There is a lot of vacant land outside the palace. Neighbors demanded that these lands should be sold without occupying the palace when no one is using it.

But after listening to them, Nicholas mocked him. He said that it is ridiculous to think that he will leave the land he bought to someone. In 2000, a journalist found his way inside the palace. He entered and saw a large hall, with stairs leading upwards. Stone pillars surround the house. There is a garden on the roof. There is also a fountain inside the palace. Nicholas also has a large collection of photographs.

Keeping his collection of pictures on one floor of the palace. 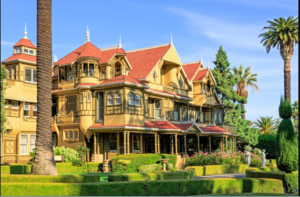 Some pictures have been taken by drone to see the present condition of this palace. In the picture, it can be seen that in front of the palace, broken things, necessary equipment for construction, etc. are kept. It can be seen that no work has been done here for many years. This Hamilton mansion is shaped like an old house in a dense forest. However, in addition to this castle, Nicholas has another 350 lands in Sussex alone. By 1980, he had bought more than two thousand properties and sold 90 percent of them.

Nicholas used to earn by buying and selling property. At the beginning of his career, he used to build houses at low cost for the poor. After working in the Bahamas in 2002, he started climbing the ladder of success. There is also a dark side to Nicholas’s life. In 1999 Nicholas assassinated his rival Mohammed Raja. He entered Mohammed’s home in the south end of London and stabbed him to death five times.

Nicholas later shot Mohammed in the head. He had to stay in jail for 10 years on the charge of murder. Nicholas was also supposed to pay six million euros (approximately Rs. 485.2 million in Indian currency) as compensation to the accused’s family. But it is said that Muhammad’s family did not even get Kanakdi. According to news agency sources, the price of this Hamilton palace in Sussex is 40 million euros (according to Indian currency, 323 crores 48 lakhs 32 thousand 190 rupees).

Nicholas claims he has no property of his own in Britain. All the property was divided among his five children.