President Vladimir Putin has denounced Russia and the United States as “insane” and “reckless” in imposing sanctions on Moscow over the Ukraine operation.

Putin claims that the Western sanctions have already failed. He says sanctions are more harmful to those who impose them.

Putin noted that the imposition of sanctions on Russia could cost the EU কোটি 400 million.

According to him, the EU has lost its political authority in responding to the war in Ukraine.

Putin said inflation was rising in EU countries. Inequality will only increase as a result of sanctions. With this ban, the real interests of the people of Europe have been sidelined.

According to the BBC, Putin made the remarks in a speech at the International Economic Forum in St. Petersburg on Friday.

“We are tough people,” he said. We can continue to face any challenge. ”

“Russia is just beginning its journey as a strong and sovereign nation. We will definitely take advantage of the huge opportunities that are available at this time and become stronger. ”

Russia will be an open economy and will not walk the path of isolation despite sanctions, Putin said. He says Russia will continue to work with Western companies.

Moreover, Putin hopes that the flow of gas on new routes will continue. He also said that Russia would try to increase the range of economic cooperation with those seeking it. 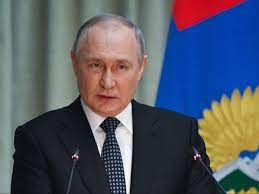 Putin has called for investment in Russia to keep trade and commerce in the country, saying his country has great potential. The West could not pull Moscow down.

On the other hand, British Prime Minister Boris Johnson is visiting Kiev for the second time in a fierce battle between Russian and Ukrainian forces.

He spoke to the military about Ukrainian President Volodymyr Zelensky.

At a news conference later, Boris Johnson promised all kinds of strategic assistance to Ukraine in the war. He said Britain would train 10,000 Ukrainian troops in three months.

Zelensky warned that Russia would have to pay a high price for the ongoing war.🔱