Russia claims that the US Central Intelligence Agency (CIA) is recruiting Syrian IS fighters to fight on behalf of Ukraine.

(ISIL or ISIS) militants detained in Kurdish-controlled prisons and camps in northeastern Syria to Ukraine.

Europe in the name of conducting additional investigations into Daesh militants.

Thus far, the United States has taken control of several high-ranking leaders and about 90 Daesh militants.

Most of them are citizens of European Union countries and Iraq.

Among them are some immigrants from Chechnya and the Xinjiang Uyghur Autonomous Region in China. 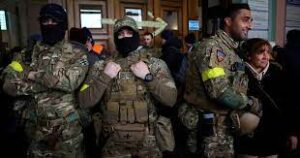 They are currently gathering in the territory of al-Tanfe, a US military base in Syria.

According to a report published by Russia’s Arabic-language RT Arabic television news network,

As part of this, they are currently training in US camps.

at the al-Tanaf base in the central Syrian province of Homs to carry out various terrorist and subversive activities.

In a confession aired on Syrian state television in May 2020,

including the ancient Syrian city of Palmyra, the Tias military airbase (T-4 airbase), and the Shayar gas field.🔱