The Russian military has chased down a British RC-135 model aircraft that violated airspace near Murmansk in western Russia. News RT

According to the ministry, the interceptor MiG-31 was sent to chase the RC-135 spy plane from the area around Cape Svyatoy Nos, near the main base of the Russian Navy’s Northern Fleet.

The Russian Defense Ministry did not provide any further information on the incident as of Monday (August 15) evening local time. 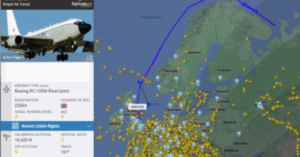 The aircraft was seen returning to the RAF base at Weddington, Lincolnshire, which is home to the RAF Intelligence Surveillance Target Acquisition and Reconnaissance (ISTAR) command.

Monday’s (August 15) incident was the first incursion of NATO aircraft into Russian territory since the conflict in Ukraine began on February 24. However, Moscow had earlier alleged that a US submarine was chased from Russian waters near the Kuril Islands in the North Pacific. But the Pentagon has denied all those allegations.

According to Russian officials, the number of NATO exercise flights near the state border increased by more than 30 percent in 2021.