The presidential election in Russia has been fraught with controversy and allegations of fraud. Vladimir Putin is running for his 4th term, but does he want it? The polls suggest that the answer to this question is no. Even if he wins, there are doubts about how much longer Putin can remain in power before age takes its toll.

One thing remains clear: For all the anger, fear and resignation Russians feel today – they will vote on Sunday morning to decide their future president. This is the story of why Vladimir Putin’s era will end one day – and how he sees it coming.

My wife, Masha Gessen, and I met the president at his dacha (second home), near Moscow. This happened on a Friday morning in late September 2001, about three weeks before 9/11. We had phoned his press secretary, Dmitry Peskov, the day before. We told him that we wanted to talk to the president about Chechnya. If he would agree, naturally, not to name names.

Dmitry Peskov had told us that Putin was working at his dacha, but would be back in Moscow by Friday evening and could see us then. We arrived at the Kremlin on Friday morning and were directed to a recently refurbished building across the street, where we waited in one of several sparsely decorated conference rooms for Peskov to call. He rang shortly after 11 am – Putin was not finished with his daily session of swimming laps in the pool, but would see us immediately afterwards. 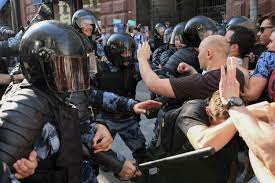 Masha and I climbed the short flight of stairs to a room on the second floor. Putin was already there, wearing a suit with no tie, his shirt open at the collar. He had small feet and large hands, which he rested on a table as we sat across from him. His manner was businesslike, his tone humorless and blunt. He was direct and frank, and he did not say a superfluous word.

The man who met us that day in September 2001 is the same person we met Friday – seven days before he won his third presidential term. He has not changed much since taking office, because there has been no need to change: Power suits him well.

The topic we wanted to discuss was not in itself complicated – it was the president’s most important project, and the one that occupied him for 14 years. The story of Chechnya was easy enough to tell: There were two wars. War Number One began on 11 December 1994 and lasted with intermissions until 26 August 1996. It began when Russian troops, sent to the “valley of peace and accord,” laid siege to Grozny, which had become a city of widows and orphans. It continued with an invasion that was meant to rid Chechnya of terrorists but instead gave rise to state-supported guerrilla warfare. Three years later, in 1999, the conflict entered its second phase, which ended in the spring of 2000 with the infamous “filtration camps” and the death by torture of many young Chechen men. War Number Two began when residents of Grozny gathered around Russian soldiers who had come to remove their dead from basements where they lay decomposing; Putin, assuming power barely a month earlier, was