A previous Afghan translator who experienced PTSD subsequent to presenting with US exceptional powers has been shot dead in the wake of accusing at cops of a six-inch kitchen blade.

Nerve racking film shows Ajmal Amani, 41, running at officials and being shot multiple times in the stomach and leg prior to drooping to the floor inside the restricted passageway of the private inn where he resided in a city-leased room in San Francisco.

Amani had been shot a few times during his five years of administration with the Navy SEALs in his country and had experienced PTSD subsequently, as indicated by his previous legal advisor and caseworker.

The mediator, who went to the US on a visa in 2014, had been requested to finish emotional well-being treatment after earlier criminal allegations, remembering attack with a dangerous weapon for 2019 for supposedly slicing a city park officer with a crate shaper. 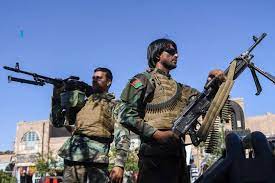 Police were called to the lodging on Friday morning after reports that a man was shouting and hollering and had a blade. Amani’s caseworker likewise called 911 to report that a colleague said Amani was having a genuinely horrendous scene.

They show Amani holding and signaling with the blade, defying two individuals, including somebody who is fighting him off with a brush, then, at that point, strolling past others into a room.

At the point when two officials show up, the man with the brush lets them know that Amani had taken steps to kill him.

An official lets the radio dispatcher know that they can hear Amani shouting.

As indicated by body camera video, the officials stay in the hallway and attempt to converse with Amani, who is in a room.

Amani swears and advises them to let him be and one official says no one needs to hurt you.