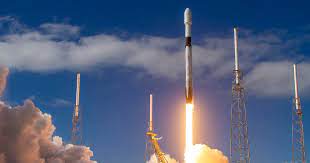 SpaceX aims to set a new record for rocket reuse Saturday with the launch of a Falcon 9 booster from California on an 11th trip to space, carrying more Starlink internet satellites into orbit. If schedules hold, another Falcon 9 will blast off from Florida’s Space Coast about 18-and-a-half hours later with an all-electric Turkish data relay spacecraft.

There is a 100% chance of good weather for a predawn launch Saturday at Vandenberg, with unrestricted visibility, north winds of 6 to 9 mph, and a temperature of 40 to 44 degrees Fahrenheit, according to the Space Force forecast team at the California spaceport.

The upper stage, meanwhile, will accelerate the stack of 52 flat-panel Starlink internet satellites into orbit, positioning the payloads for deployment at T+plus 15 minutes, 36 seconds to complete the Starlink 4-4 launch sequence, according to a mission timeline released by SpaceX.

The booster assigned to Saturday morning’s flight is designated B1051 in SpaceX’s inventory. It will make its 11th flight to space and back since debuting in March 2019 with the launch of the unpiloted test flight of SpaceX’s Crew Dragon spaceship from Kennedy Space Center in Florida.

Since then, the booster launched Canada’s Radarsat Constellation Mission, SiriusXM’s SXM 7 radio broadcasting satellite, and seven of SpaceX’s previous 32 dedicated Starlink missions. It most recently launched May 9 from Cape Canaveral, and its landing on a drone ship is posted below.

When SpaceX launched the first of its newest generation of Falcon 9 rockets, called the Block 5, in 2018, officials said the upgraded boosters could fly 10 times before requiring major refurbishment. But that has changed with flight experience.

Since launching the first reused Falcon 9 first stage on a mission in 2017, SpaceX has cinched agreements with all of its customers to fly payloads on recycled rockets. Seventy-six of SpaceX’s 134 Falcon 9 and Falcon Heavy flights have used previously-flown boosters.

While a launch crew at Vandenberg preps for blastoff Saturday morning, a separate SpaceX team at Cape Canaveral planned to roll a Falcon 9 rocket out to pad 40 Friday ahead of a launch set for Saturday night with Turkey’s Turksat 5B geostationary communications satellite.

The official launch weather forecast at Cape Canaveral predicts an 80% chance of acceptable conditions for launch Saturday night, with cumulus clouds listed as the only slight concern. Partly cloudy skies are expected, with winds from the south at 10 to 15 mph, and a temperature of about 69 degrees Fahrenheit.

Russia has launched two Soyuz rockets from different launch sites on numerous occasions over the venerable vehicle’s history. Most recently, Soyuz rockets launched from pads at the Baikonur Cosmodrome in Kazakhstan and from French Guiana just two hours apart in 2013 and 2015.

The Falcon 9 flight from Vandenberg Saturday morning will follow an unusual southeast trajectory from the military launch base, hugging the coastline of Baja California on the way into orbit.

The 52 satellites will use krypton-fueled ion thrusters to maneuver into their operating orbits at an altitude of 335 miles, joining the rest of the Starlink fleet providing global internet service. With the next batch of satellites, SpaceX will have launched 1,944 Starlink spacecraft since May 2019.

A tabulation maintained by Jonathan McDowell, an astrophysicist and widely-respected tracker of spaceflight activity, shows that SpaceX currently has 1,729 functioning Starlink satellites in orbit. Of those, 1,467 satellites are operational, while the rest are still maneuvering into their slots in the constellation, or are otherwise working but not providing internet service.