The heat wave that has been going on for the past few weeks has increased demand for electricity in Spain, like in other European countries.

In this situation, the Prime Minister of Spain, Pedro Sánchez, has called on all public and private workers to avoid wearing ties to save energy.

The Spanish Prime Minister arrived in a press conference in the capital Madrid on Friday in a suit without a tie.

Then, at the beginning of his speech, he drew everyone’s attention to this matter and said, ‘You see, I am not wearing a tie today; And I want, from now on,

all the members of the cabinet, all the workers of public and private institutions will refrain from wearing ties till winter comes.’

“If we can practice going without a tie this summer, there will be two benefits – firstly, heat discomfort will reduced and secondly, we will be able to save electricity.”

The average temperature in Spain during the summer is 25 degrees Celsius or less. However, in the summer of this year, a long heat wave has started in Spain, like other countries in Europe.

Temperatures in most parts of Spain were in the 40s for most of July, with temperatures rising to 45s in the south and south-west of the country. 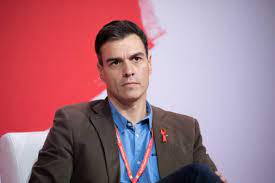 At least 84 people died in Spain in July due to this massive heat wave. According to the country’s Ministry of Health, these deaths occurred on July 10, 11 and 12.

The temperature in the capital Madrid was 36 degrees Celsius when the Spanish Prime Minister was holding a press conference on Friday.

In a report, the BBC reported that the government led by Prime Minister Sanchez is preparing to issue a decree to make the use of electricity

cost-effective due to the heat wave and the resulting increase in electricity demand across the country. This decree will  issued next Monday.

Of course, Spain is not the first to discourage the wearing of ties by public and private workers. When a heat wave hit Japan in the summer of 2011,

the country’s then-government encouraged people to avoid suit-ties and wear light clothing that tolerates the heat.

In the United Kingdom, the House of Commons recently issued a notice to lawmakers due to the massive heat wave that started this summer.

It has  said that MPs can keep off their suit jackets and ties while staying in Parliament.🔱