“I don’t know if I can do this.” Those were the words that reverberated through my head as I walked up to the border. For weeks, I had been following an online group of activists who were busing refugees from Central America to the US-Mexico border in order to apply for asylum. It was a long way – 1,000 miles or more – and it took us almost two months of planning before we finally arrived at our destination: Nogales, Mexico.

It was early in the morning when we arrived, and it seemed as if the whole town had come out to see us. There were a lot of journalists who wanted their sound bites and lots of onlookers who just wanted a peek at this odd gathering of Americans with backpacks. But mostly, there were children – children everywhere. They weren’t scared or surprised to see us. The children of Nogales go through the same thing every single day – they wake up, walk past this very spot, and head off to school with their mothers. I could feel myself tense up as we approached the border gate.

The first step into Mexico was easy, but then came the second step – the step through the border gate. Everyone was on edge as we waited for a coyote, a human trafficker who would take us closer to the US-Mexico line where we could attempt to cross into America. We were all filled with fear and hope, unsure if this would actually work.

I worked hard to conceal my emotions as I took that step. All I could think about was the long journey we had ahead of us and what it would be like if we were turned around and sent back to Nogales. There were no guarantees – only a thousand doubts and fears clouding my mind as we finally crossed the gate into Mexico. 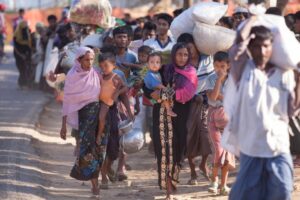 We managed to avoid detection by the Mexican police and we made it to a safe house in Nogales where we stayed for about a week. We were all nervous, wondering if we would be turned back by the coyote and left behind at the border. There was no way of knowing until he decided to return and collect us – and that decision could come at any moment.

After a few days, the coyote returned and called for us all to sit down. We were about to learn if our gamble had paid off. He told us that our plan was valid – he would take us as far as possible into America where we could attempt to cross the border ourselves. I watched everyone’s eyes light up at the news – it was a mixture of excitement and disbelief. But no one dared show their feelings, for fear that the coyote might change his mind if he saw too much excitement.

I couldn’t help but smile as I listened to the coyote tell us what would happen next. We were going to cross into America through an unmarked desert area of the border. The journey would be long and we would have to walk through some dangerous areas where we could encounter drug traffickers or bandits, but many others had made this journey before us and it was very possible that we could too.

I held my emotions back as I listened to the coyote lay out our route for us over a map. It was a lot to take in – but as soon as I heard that we would be walking through the desert, I knew there was no turning back. This trip wasn’t about changing my mind – this was about getting into America and having a chance to live a better life.

It didn’t take long for us to load up and head out. The coyote talked to us about what our route would be like, how long it would take us, and where we could expect the most danger. I paid attention to everything he said, but I also had faith that this man knew the desert much better than any of us ever could – after all, this was his job.