The case of missing 4-year-old Cleo Smith has taken a dramatic turn, with police charging Terence Darrell Kelly over her abduction and presumed death. The 26 year old was charged on Saturday night and is expected to face Melbourne Magistrates Court early next week. After being questioned by police for more than 24 hours, Mr Kelly was last night charged with the abduction and murder of the four year old after a search of a Heidelberg West house on Thursday afternoon. Detectives from the homicide squad, who headed the investigation into Cleo’s disappearance, were also questioning two other men present during the raid. From tomorrow the investigation will be passed on to homicide squad detectives, who will head a special strike force of 20 officers. Police revealed that they had been unable to question Mr Kelly about Cleo’s abduction for at least 24 hours because he was too drunk when arrested. A police spokesman said: “He was as drunk as a rat and as far as I know he still is to. The 32-year-old Heidelberg West man was charged with being an accessory after the fact of murder, but expected to be charged with murder late yesterday. Senior police said they would not have enough evidence to charge Mr Kelly with any offence if Cleo’s body was not found. It would depend on locating her body, they said. Police found two knives during their search of Mr Kelly’s home on Thursday night. They are still to be tested for traces of Cleo’s blood.

Police refused to reveal what prompted them to make the arrest but confirmed that they had been investigating Mr Kelly since Christmas Eve. It is understood Mr Kelly has not confessed to anything. Police said Mr Kelly was not known to the child protection agency, though friends of the family say that he has dabbled in drugs and dealt with prostitutes. 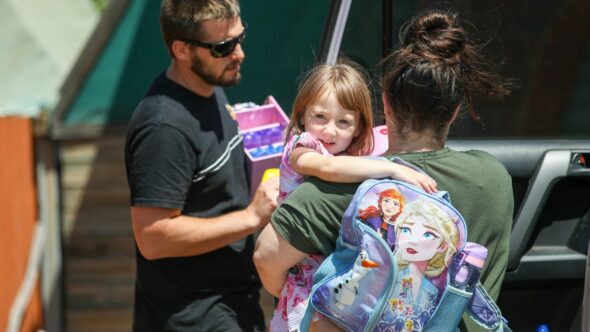 Senior police would not comment on reports that Mr Kelly had tried to contact Cleo’s mother Priscilla this week or if he had sought legal advice before his arrest. However, an associate of Mr Kelly’s who did not want to be named said He has been under a lot of strain. He wanted legal representation and he was worried about Priscilla hearing about the warrant before it went down.

Mr Kelly runs a demolition business and lives in a rented two-bedroom weatherboard house on Blamey St, where Cleo’s body is believed to have been kept for as long as two days after she was abducted from her Sydenham home on Christmas Eve.

Police began searching the house last Thursday but were forced out by a group of Mr Kelly’s associates who threatened to smash their car windscreens and beat them up.

One neighbour said I don’t think he liked the police very much. Everyone on this street knows everyone but no one has been here for weeks.

Another resident said she saw a man fitting Mr Kelly’s description dumping rubbish from his house on Christmas Eve. She thought nothing of it at the time, as many people were burning Christmas rubbish on that night.

However, she said I would have assumed the person burning rubbish was male because it seemed so heavy. It could have been Cleo’s body for all I know. I don’t think anyone noticed anything suspicious in this street over Christmas. No one thinks of Blamey St as a bad street – people used to leave their doors unlocked at night.

It is understood that Mr Kelly was arrested at his home after police again questioned the occupants of the Sydenham house where Cleo was last seen alive about 2am today. The men, who are believed to have been drinking with Cleo’s father Greg Simms, 44, on Christmas Eve, were unable to give satisfactory alibis for their movements until after Cleo’s body was found.

A police spokesman refused to discuss other investigative avenues that led them to Mr Kelly, but said: We’ve been making inquiries and we know he has been in the proximity of the abduction site.

Police sources confirmed they had all but discounted convicted child killer Bevan Spencer von Einem as a suspect.