A petrochemical factory in China has caught fire. The accident happened on Saturday (June 18) at the factory of Sinopec Shanghai Petrochemical Company Limited in the country.

This is the information of Reuters.

The state-run Shanghai Daily posted a video on Twitter. The fire was  spreading in a part of the big factory.

At this time black smoke and coils of fire can  rising in the sky.

It  learned that the fire broke out at one of the largest petrochemical factories in China at around 4 am local time. 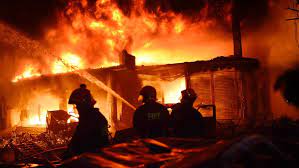 The fire came under control around 9 am. The task was difficult, officials said.

A Sinopec spokesman said a driver from another company had died in the crash. Another  injured.

Meanwhile, state-run Sinopec said it was monitoring the effects of volatile organic compounds and rainwater.

It has also been reported that no effect has been felt in the surrounding water yet.