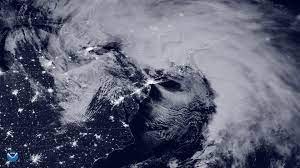 A weather bomb is a rapid cyclogenesis, or the process by which an extratropical cyclone strengthens abruptly in mid-latitudes. These powerful storms can cause hurricane-force winds and heavy rains across the Northeastern United States, as we are seeing with this bomb cyclone that has been dubbed Winter Storm Grayson. The storm is expected to move up the East Coast and will continue bring hurricane force winds and rain throughout much of Friday.

The National Weather Service has said that the New York City area could see winds as high as 60 miles per hour. The service also says that Boston will be hit by blizzard conditions with wind gusts up to 70 mph. While predicting snow is hard, it looks like this weather bomb will bring a significant amount of snowfall and strong winds to the East Coast.

On satellite imagery, you can see that this storm has very cold cloud tops and is experiencing a significant amount of banding. Banding is when strong storms in mid-latitude regions will usually be accompanied by lines (or bands) of thunderstorms and precipitation. This allows the storm to become vertically stacked with colder air at the top and warmer air near the bottom. The banding typically forms on the southwest side of extratropical cyclones, allowing it to get bombarded by moisture from nearby oceans.

The National Weather Service says that winter storm warnings are in effect for parts of North Carolina, Virginia, Maryland and New Jersey. It has also stated that Winter Storm Grayson will bring mix of rain, sleet and snow to the area.

Some areas are expected to see up to 12 inches of snowfall on Friday, with the heaviest totals over southeastern North Carolina, southern New Jersey and coastal Long Island. The National Weather Service says that this storm is bringing life-threatening conditions.

Weather bomb storm has the potential to be a historic blizzard along the East Coast. This is partly due to its expected track bringing it up the coast before turning eastward and then out to sea. In other words, coastal cities from Boston all the way down to Florida will feel some of these impacts from Winter Storm Grayson.

Washington, DC and Philadelphia are expected to see accumulations of 10-14 inches. New York City could experience blizzard conditions with coastal flooding at high tide especially. This is why the National Weather Service has issued a Blizzard Warning for Long Island and the southern coast of Connecticut.

Snowfall will begin in earnest on Thursday night as Winter Storm Grayson moves up the coast and strengthens. By Friday morning, parts of New England could see more than a foot of snowfall. The National Weather Service has said that this could be one of the biggest storms in recent memory for central North Carolina.

As you can see from this forecast map , Winter Storm Grayson will bring significant amounts of snowfall to much of the East Coast. Blizzard warnings are in effect for parts of New England, while Winter Storm Warnings and Winter Weather Advisories will be in effect for most other areas.