The incident took place in Firozabad, Iran. There, a woman named Mavash Leghai was married with great fanfare.

To celebrate that marriage, the groom’s cousin fired his unlicensed rifle. Fire the first round properly. But during the second round, there was a problem.

He could not control the high powered rifle. The bullet that came out of it went straight to the head of the 24-year-old bride Mavash.

Besides, two others were injured. The newly married Mavas went into a coma after being shot. Then he died. However, the two injured male guests survived.

After the incident, the groom’s relative shot him with a rifle. But the police managed to arrest him.

Celebrating wedding ceremonies with shooting is a forbidden tradition in Iran. 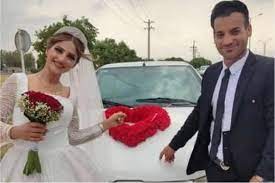 Regarding this, Colonel Mehdi Jokar, the spokesman of the Iranian police, said, “We received reports of firing at a wedding ceremony in Firuzabad city. Immediately the policemen went there.

According to police, the guest who was shot is 36 years old. He is the groom’s cousin. He had no control over the weapon. The person fled from the scene after the tragic incident.

According to the New York Post, Mahvash Legai recently graduated with a bachelor’s degree in psychology.

He was also a social worker who worked to de-addiction drug addicts. After his death, his organs were donated as per Mahabhash’s last wish.🔱