The flood situation in Assam, India has further deteriorated. At least 11 more people died in the state in a single day on Monday (June 20th).

As a result, the number of deaths due to ongoing floods and landslides in Assam has risen to 72. About 48 lakh residents of 32 districts of the state have been affected by the floods.

About five and a half thousand villages have been flooded. News Times of India.

As time goes on, the flood situation in Assam seems to be getting worse.

A record amount of rainfall  also reported in the state on Monday (June 20).

At the same time landslides have occurred in different places. It has  reported that several people lost their lives in one day.

The ongoing floods have inundated 48 lakh residents of 32 out of 35 districts of the state. More than 5,400 villages have been flooded.

Numerous houses have  submerged in water, cattle have  washed away, hectare after hectare of crop land has destroyed. 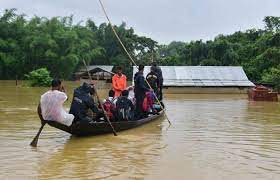 About two and a half lakh people have already taken shelter in 615 shelters to save their lives.

Members of various rescue agencies of the state government rushed to the spot to rescue the flood victims.

The bodies of two missing policemen  recovered after swept away in the flood waters. They went missing on Sunday night, local time.

He also gave necessary instructions so that adequate food and emergency relief items could reach the flood-hit areas quickly.

Meanwhile, meteorologists are not seeing any signs of improvement in the flood situation as the water of Brahmaputra river is still flowing above the danger level and heavy rains are continuing.

The flood situation remained unchanged in the neighboring state of Meghalaya. Many more areas have newly inundated as heavy rains continue in Cherrapunji.

The state government has sought financial assistance of Tk 300 crore from the central government to control the situation.

The flood situation has also deteriorated in Tripura, another northeastern state.🔱