A rare pure pink diamond has  found in a mine in the Central African country of Angola. The Australian company that runs the mine said on Wednesday that it was the largest pink diamond found in the last 300 years.

The 170 carat pink diamond named The Lulo Rose. It  found in the Lulo mine in the diamond-rich northeast of Angola.

The new diamond is one of the largest pink diamonds ever found, the Hidden Diamond Company said in a statement to investors.

The discovery of the Type 2A diamond has  hailed as a historic event. It is one of the rarest and purest of natural stones. The Angolan government welcomed the acquisition.

They also have a share in the ownership of the mine. 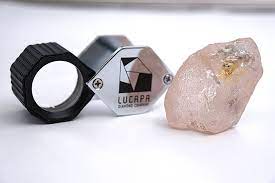 Angola’s Minister of Mineral Resources, Diamintino Azevedo, said, “This record and spectacular pink diamond recovered from Lulo will showcase Angola as an important player on the world stage.”

The diamond will sold through an international auction. It  expected to sell for a much higher price.

However, The Lulo Rose needs to  cut and polished to fetch the highest price at sale time. It can lose up to 50 percent of its weight during this process. However, similar pink diamonds sold for higher prices in the past.