Ever since the discovery of his magnificent tomb in Ludlow, Shropshire England, historians have been trying to unravel the mystery that is The Black Prince. It was previously believed that Richard II ordered for his father’s grave site before he died; however, new research has shown this not to be true. In fact, it is now believed that the tomb was only started after his father’s death and finished after The Black Prince’s own; therefore making him the first person to be buried there.

The Black Prince died on June 8th, 1376 and it should have been a time of great mourning for England. However, since there were constant wars going on, this was not as big of a deal as one would have expected. In fact, the only thing it really did was raise taxes throughout the kingdom. The problem with this is that it didn’t do anything to help those who had lost family members during the war and even if they were paid for their loss, there was still much work to be done; therefore, making life even more difficult.

Around the time of The Black Prince’s death, King Edward III was in Germany trying to help his son-in-law get elected as Holy Roman Emperor. This prompted Kenneth Pickthorn to state that it must have been important for the English crown to go through all this trouble to get the Black Prince a proper burial because they probably knew he could have been in danger while he was alive.

The fact that not much is known about The Black Prince’s life might be because of how secretive he kept his personal affairs, but it seems more likely that it was due to the fact that he died so young. The only thing historians really know about him is that his family moved to Bordeaux after the Treaty of Brétigny in 1360 which resulted in French land being given back to England. 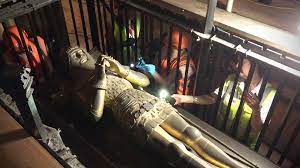 However, what Pickthorn does know is that Edward III treated The Black Prince as a prince even though he wasn’t one. In fact, he was only created Prince of Wales after he defeated The King John II of France at Poitiers in 1356 – a title that the Prince kept until the day he died.

Pickthorn also noted that The Black Prince’s tomb was probably inspired by Queen Eleanor’s death and burial which took place just a few years before his. This hints at the possibility that the tomb was built to honor both of them since they were both extraordinary people in their own right, but this is one mystery that probably will never be solved.